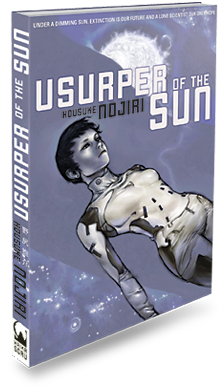 Usurper of the Sun is reminiscent of many science fiction classics. For example, this is a novel in the same sense that Isaac Asimov's Foundation stories comprise a novel. There are also shades of Arthur C. Clarke's Odyssey series as the narrative takes place over several years. But Housuke Nojiri also infuses the novel with a lot of modern elements, from credible science to a truly alien mind that makes for great philosophical discourse.

The biggest strength--and weakness--of the book is that this is a hard science fiction novel. What I mean by that is that it features all the tropes of the genre, with exposition and explanation dominating most of the pages. Even character dialogue stretches credulity as everyone seems to know what they're talking about and various scientific concepts are thrown into the air. This can be jarring if you're not a big fan of hard science fiction, but those accustomed to such technicalities will find this to be exciting and riveting (especially with all the plausible science Nojiri postulates).

To the credit of the translator, John Wunderley, he expounds on all these concepts seamlessly and retains the plain and accessible language that the Haikasoru line has developed (at least with all four books released so far). Author Nojiri also anchors the narrative through his protagonist, Aki, one of the more proactive and interesting characters in science fiction. Admittedly, the pace is slow at the beginning, but the short chapters remedy that. Events start to pick up in the third part of the book, as the conflict is ramped up and there's a payoff in what's previously been established.

Nojiri's prose isn't perfect. There are parts where he succumbs to Japanese genre cliches, such as an illuminati-like organization communicating in a dark room without video and only their voices could be heard. Considering that there was no real threat and nothing's stopping them from holding an ordinary board room meeting, I felt that part was a bit exaggerated. Still, weaknesses aside, Usurper of the Sun is a faithful hard science fiction book that explores a lot of possibilities and concepts. If you don't mind reading lots of exposition--and this is probably as accessible as hard science fiction is going to get--this is a good entry into the field.
Posted by Charles at 7:43 AM