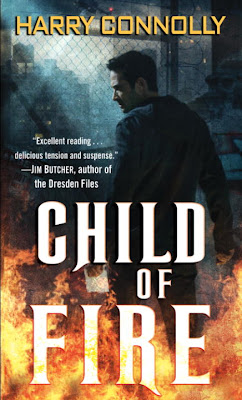 The fad for the past few years has been the urban fantasy genre. With the exception of Jim Butcher, the rest of the field seems to be dominated by female protagonists, and sometimes crosses the line into the paranormal romance genre. Child of Fire by Harry Connolly is one of those rarities which features a male main character, although the rest is expected formula: a mystery to be solved, a secret organization/conspiracy, and lots of inevitable action. Connolly tries to be different by using the Walking Tall archetype as our hero enters a frontier town and cleans up the corruption present there (which happens to be supernatural in nature).

So how does the entire novel fare? I'm honestly unimpressed. Which doesn't make it a bad book but it's not one that's compelling enough. Connolly gets it right by starting in the middle of the action, in this case a reformed thief coerced into serving the mysterious organization known as the Twelve Palaces. Necessary background information is fleshed out via flashback and there's always something new popping up to keep our protagonist preoccupied. Even the deus-ex-machina tool of our hero, a magical knife-that-isn't-a-knife, is pretty cool and sees much usage. Unfortunately, it's the other areas that falter.

While the pace is relatively fast, it's not as compact or tight, at least compared to a Harry Dresden novel: while I am curious about the plot, it's not one that you can't put down. The city and the action scenes could also use more fleshing out. There are points where I doubt the veracity of the hero's exploits, such as the lack of recoil when firing uzis. The characterization is competent enough, except for the parts where Connolly resorts to telling us his hero is tempted by the magic of his handler. It's the only out of character detail, or at least not backed up by descriptive scenes.

At the end of the day, Child of Fire is a decent book, but there are areas that need polishing. I can see how Del Rey picked up this series, but right now, it lacks that extra effort which would make it stand out from the other urban fantasy novels out there. Which is a waste because the book does have something different to offer, but as it is, it's simply good instead of being outstanding. Perhaps die-hard urban fantasy fans will bite into this but as for me, I'll read it but it's not a must-buy.
Posted by Charles at 7:08 AM