One of the more apparent paradoxes in my life is the fact that I work in a music magazine yet I don't listen to music (at least in a language I understand--JPOP yo!). However, I am very geeky and so amassing my knowledge of pop culture, I give you the top five fictional bands.

1) The Gorillaz - The only "real" band in the list--hence me not knowing anything about them--this virtual band sold millions of albums and is perhaps the only band in the list that you won't feel guilty listening to in public.

2) Josie and the Pussy Cats - Easily the oldest band in the list although they haven't really aged in five decades, especially casting popular then-teen actresses in the 2001 film adaptation. Suffice to say, you have to be old-school to appreciate this band spawned by Archie Comics and then later immortalized by Hanna-Barbera. 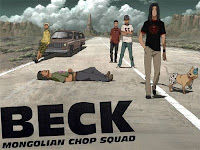 4) Beck: Mongolian Chop Squad - Perhaps the most down-to-earth fictional band is Beck, a manga series later turned into an anime. The basic premise is that a recently-formed band attempts to hit it big and the series is littered with various rock-and-roll influences. What made it even better was when the anime was released and people actually got to hear what the band should sound like.

5) Fire Bomber - Music saves the universe and I'd probably nominate Lynn Minmay or Macross/Robotech fame but she's not a band so I'll go for one of the later sequels, Macross 7, where you have an actual band piloting jets and robots (using their instruments to control their vehicles) to combat aliens that leave people in a catatonic state. Leave it to music to solve all the world's problems.

Other Music-Related Titles You Might Want To Check Out:

Jojo's Bizarre Adventures - Another manga series that is, uh, truly bizarre, the third story arc developed these supernatural companions to the various heroes and villains called "Stands" and were thematically named after the Tarot. One story arc later, all the Tarot names were exhausted and the creator started referencing songs and bands for the name of the various Stands such as Aerosmith for a toy airplane, Sex Pistols for six living bullets, and Goo Goo Dolls which has the ability to shrink people.

Amazing Joy Buzzards - This comic not only featured a unique art style but off-the-top, pulp action as the band The Amazing Joy Buzzards unwittingly works for the Central Intelligence Agency (CIA) thinking it's the Creative International Artists Agency.
Posted by Charles at 6:55 AM

You didn't list Metalocalypse. Easily the next thing closest to a "real band" after The Gorillaz. According to Wikipedia it was the highest charting death metal album ever.

Sorry, never heard of it in this part of the world.