I was planning to post this on Tuesday but I have a lot of things planned for my Tuesday features in the next few weeks so it's now or never.

Perhaps what distinguishes manga from Western comics is its diverse genres. It's actually surprising that the sports genre is so extensively covered by the Japanese, even if in retrospect sports is a genre that makes a lot of sense (it's not like we don't have sports movies for example). Here is a list of what I think are the five most influential sports manga (some of which are older than me!) as well as a list of more modern titles.

Captain Tsubasa by Yoichi Takahashi - One could arguably make a case that Japan's participation in the recent World Cup is due to this particular title. At the very least, the Captain Tsubasa franchise has inspired more than a few professional soccer players. Captain Tsubasa follows the exploits of Tsubasa as he leads his soccer team to victory, starting off as a kid until he grows up to participate in the World Cup-like tournaments itself. The franchise is quite huge, spawning video games and numerous anime remakes. The early story arcs are easily the best episodes (and the history from which the sequels draw from) and Captain Tsubasa is an example of the idealistic hero who never gives up and wins the day in the end.

Ashita no Joe by Tetsuya Chiba - Pretty much like manga legend Osamu Tezuka, Tetsuya Chiba was decades ahead of its time when he wrote Ashita no Joe, a sports manga about boxing. This was pretty much a realistic piece of fiction and perhaps one of the most heartbreaking moments when the protagonist Joe accidentally kills his rival in a boxing match. There was even an actual funeral for the death of this manga character and Ashita no Joe has become part of Japan's zeitgeist in much the same way Rocky has become America's pop culture icon when you mention the sport boxing. 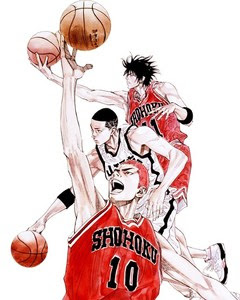 Slam Dunk by Takehiko Inoue (Viz) - One of the more "recent" titles in this list (save perhaps for Hajime no Ippo), Slam Dunk placed first in the 2006 Japan Media Arts Festival in the list of top 10 manga. In the shadow of popular sports titles like Captain Tsubasa, which was aimed at kids and full of action and excitement, and Touch, which focused more on character drama, Slam Dunk distinguished itself with its mix of both elements, combining realism with comedy, action with drama. Pretty much like any other title in this list, Slam Dunk was adapted into an anime series and then the manga was reprinted in a deluxe edition with specific pages colored. 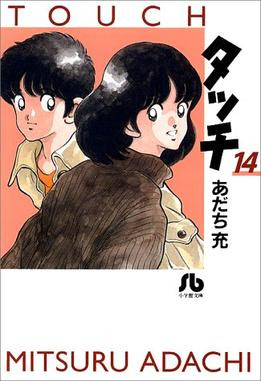 Touch by Mitsuru Adachi - Mitsuru Adachi's ability to write both shonen (boys) and shojo (girls) titles is evident in his series Touch. In fact, it's not readily a title I'd immediately slap the sports label on and reads more like a drama (and has been in fact adapted into a Japanese live-action drama). Mitsuru Adachi won the Shogakukan Manga Award for this title (along with his other series Miyuki) and is proof that characterization and story is just as important as action in a sports title. Touch starts out with twin brothers and the girl-next-door, with one of the brothers hard-working and into baseball while the other one is lazy and doesn't seem to be passionate about anything. That dynamic slowly changes however over the course of the story...

Hajime no ippo by Jyoji Morikawa - Let's put it this way: Hajime no Ippo began in 1990. It's currently in its 81st volume and still going strong. While not easily as recognizable as the other titles in the list, Hajime no Ippo is a boxing title that has tenacity and is quite accessible to modern readers. Hajime no Ippo starts out with Ippo, a high school student who frequently gets bullied. He eventually takes up boxing to become stronger but soon finds himself knee-deep into the sport.

what about ace o nerae and yawara? i don't think they're all that influential, but they're pretty enjoyable.

Too old/too difficult to obtain although I did enjoy Yawara =)

Ashita No Joe's cultural influence really can't be overstated. It was, at the time it was released, fairly subversive and is notable for being the only manga referenced by terrorists.

Interesting choices. I certainly won't contest in most, but for Touch, despite it's sports background, is really closer to a shounen love story than a sports manga. I think the lack of detail on the last Koushien game (and everything in between) shows how it's really character driven than being sports driven as well. If it were really truly about sports, then we'd be knowing more baseball terms. I think H2 or Major would have been more appropriate. Maybe even Ookiku Furikabutte would have taught more about the sport (sans the adolescent background). I mean, the key here was being influential as a sports manga right? :) Touch was popular but barely because of the baseball but because of the whole Minami and Tacchan pair and the dream of Koushien. There were more features on which girl was like Minami or which guy reminded people of Kacchan.

On the side, I also support Bhex. Where's Ace o Nerae and Yawara? :) They're quite available and readable especially if you went to Manga Kissa 10. Yawara especially because if it weren't for Yawara, the Judo sensation for the olympics would not have happened in Japan. :) The series deserves much more love~~ <3

Not disputing those facts about Touch. =) But I wanted to mention it because of just that fact--it's a drama with a touch of sports in it.

What kind of idiot would recommend Prince of Tennis to someone who wants to read sports manga? And since when as Go been sports? I find that these are poor choices for titles to recommend -- popular doesn't really mean they're good and/or influential, fyi. :)

You are of course entitled to your opinion.

As for Prince of Tennis, last time I checked, tennis is a sport, and yes, it qualifies as sports manga. Is it realistic sports manga? Perhaps not. Is it good manga? Beauty is in the eye of the beholder. Either way, I'm mentioning it because this is my blog after all.

As for Go being a sport, well, there are people who think sports = physical fitness, the same way that they don't think chess is a sport. If you're the type that believes that, well, I'm sorry you have such a limited view of what falls under sports.

Oh, and don't confuse the top part from the bottom part. The first five are what I'd label as influential manga. The latter five are just plain sports manga that I'd recommend (it has another requirement that I didn't mention to other people, which is that it should be relatively "recent" but that's my fault). (If that weren't the case, I'd just extend the list to 10 Influential Manga.) As far as popularity goes, no, popularity does not necessarily equate with something being good. But one can't be influential if it ain't popular, at least most of the time.

sorry to interrupt your debate but..i'm gonna throw in my own opinion..
first off, prince of tennis is VERY enjoyable ok? fiction or no fiction the manga is popular for a reason like charles said "beauty is in the eye of the beholder" is my only good answer for Mrs. annonynous (not me). anyway thanks for letting me comment!

Nice post. I completely agree on Eyeshield 21 and Slam Dunk, though I would have been a lot more complimentary. Initial D sounds interesting, I think I'll look it up. I haven't read any baseball mangas, staying away from that, it isn't on my top 5 sports to play. But I'm curious, so who knows? Also, where can I find some good basketball or football, soccer or American, mangas? I heard about some Slam Dunk sequel, is it true, do you know?