I am not a lawyer. What I do have, however, is documentation. What I want to discuss is the country's policy when it comes to the taxation of books. I don't want to limit it to the law itself, but rather the implementation and enforcement of policy (for example, this iPhone App wouldn't be necessary of taxi drivers in the country actually followed policy).

Last May 2009, the issue of the "Book Blockade" is brought up by Robin Hemley. Manuel L. Quezon III has a detailed timeline of the events that transpired. Suffice to say, then-President Arroyo lifts taxes on book imports.

However, this isn't the end of the discussion when it comes to taxes on import books. And as I said in an old blog entry, what takes place isn't a "book blockade" per se, although numerous writers, bloggers, and journalists have used the term:


There are some things which I want to clarify: this is not (just) the book blockade. For the most part, the book blockade centered on importers of books, namely the distributors and bookstores. That aspect was successfully fended off (for now). The issue of arbitrary taxing of individuals at the post office is a separate issue, and was not championed by Rep. Teodoro Locsin Jr.

To be fair to Robin Hemly, I am guilty of what he was originally fearful of:


However, what worries me is that some bloggers in the Philippines are parsing the issues too finely, in such a legalistic manner that they run the risk of diluting the issue entirely. The bottom line is that the Philippines is in direct violation of an international U.N. treaty it ratified in 1979 that prohibits any and all duties imposed on books. It's that simple. No wiggle room.

So in 2009, while (commercial) importers of books may have been exempted from taxes on import books, individuals weren't. In August of the same year, there was this complaint:


According to the NBDB, the individual book buyer must apply for duty exemption at the DOF. You get the exemption the same day you apply for it; you have to apply for an exemption every time you have books coming in. It’s just how it is right now.

Before I proceed, let me present to you receipts from the post office from 2011, just to show you how much tax a citizen has to pay. 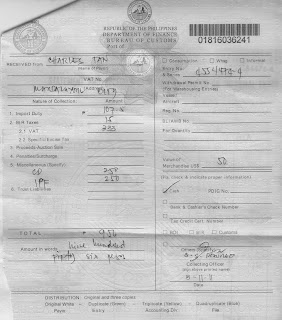 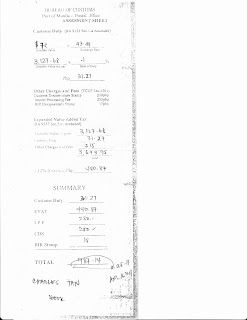 When it comes to policy, the problem here is that the taxation of these books are arbitrary. I have some packages which aren't taxed. Others are. Lately, I'm being taxed for books that are shipped in boxes (as opposed to envelopes). Clearly, there is a problem with implementation and enforcement.

As far as filing an exemption is concerned, here's the instructions from the National Book Development Board's (NBDB) website (I am only highlighting passages with regards to fees):

Now the second fee (Import Processing Fee, etc.) is in line with the breakdown I gave previously. I also want to amend that the Post Office Parcel Fee has been increased to P40.00.

To be fair, to a commercial importer or institution, the exemption process might be considered reasonable. To an individual, however, the effort, time, and costs is arguably not worth it.

As of December 12, 2011, the Department of Finance issued a new department order (which was publicly disclosed a few days ago). In many ways, it is more favorable than the previous memo. I'll quote the relevant sections:


c. Personal effects/personal use – As explained by Customs Administrative Order No. 7-72 or the implementing rules and regulations of Section 105 of the TCCP, as amended, this term refers to those embracing all articles of personality not considered as merchandise, including books.

All imported books, whether for commercial or personal use with the exception of those published by or for a private commercial enterprise essentially for advertising purposes as stated in Annex A of the Florence Agreement, are exempt from customs duties. Importation of books is likewise exempt from value-added tax (VAT) pursuant to Section 109 (R) of the National Internal Revenue Code.

3.1 For Books Imported in Commercial Quantities

Prior to the release by the Bureau of Customs (BOC) of books imported in commercial quantities, the importers must first present an endorsement from the Revenue Office of the Department of Finance for the duty- and VAT-free importation of books/materials covered by the Florence Agreement which shall be issued after submission of the following documents —

3.2 For Books Imported as Personal Effects or for Personal Use

The endorsement prescribed under Section 3.1 hereof shall not be required for books imported as personal effects or for personal use as defined under Section 2(b) of this Order, whether transported as accompanied baggage, through couriers or the post offices. Said importations however, should be cleared and released through the required declaration of goods as provided under existing rules and regulations.

There is even further clarification in today's announcement:

Otherwise, imports will be treated as of “commercial quantity,” considered “in excess of what is compatible and commensurate with a person’s normal requirements,” the order stated.

Under this classification, the order said importers must first present an endorsement from the Revenue Office of the Finance department, certifying that products to be imported fall within those granted tax and duty exemptions by the Florence Agreement.

The order listed down documentary requirements that need to be submitted to secure such endorsement. They are: bill of lading, commercial invoice, packing list with title of books, affidavit to the effect that the shipment consists of books, certification from UNESCO Office in the Philippines attesting that the importation/s is/are covered by the Florence Agreement, and registration certificate with the National Book Development Board as book importer or publisher.

In case of donated books, a deed of donation duly authenticated by the Philippine Consulate abroad and deed of acceptance must be provided, the order stated. An authority is also required should the consignee assign a representative to facilitate the books’ release.

What does this mean?

Well, theoretically, if the book is for personal use (six or less copies of the same title for an individual, twice that for institutions), then you will not be taxed. And by tax, that probably means VAT and Rate of Duty (if NBDB's exemption policies applies here). It is unclear whether the other fees apply. For example, there is no omitting the P40.00 Post Office Parcel Fee. That's a reasonable cost for a public service. There is an argument to be made, however, for the various Documentary Stamps and Processing Fees, which amount to P515.00.

Another issue for me is that while it's nice to have this in theory, whether this will be actually be implemented. The Post Office and Customs have, after all, disregarded the law as evidenced by events prior to and post Book Blockade.

To commercial institutions, this is a boon, as the law is transparent. For other institutions, however, such as libraries (which may exceed the twelve-book limit) or charities (or whoever might solicit book donations), this might be an issue.


“However, we are still trying to get clarification from the DOF on the procedures for the clearance and release of imported books. For those importing for commercial purposes, there’s a long list of requirements under the directive. I am of the opinion that these requirements are too stiff, and I will take this up with the DOF. For those importing for personal purposes, I just want to ensure that there won’t be cumbersome paperwork involved.”

At the same time, she said the DOF Order should also be disseminated to all BOC and DOF offices and personnel, as well as courier services, to prevent any confusion in its implementation.