Book Review: Sourdough and Other Stories by Angela Slatter 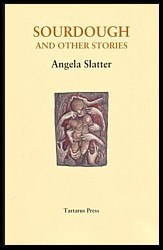 There's an art to introductions and afterwords — in this case written by Robert Shearman and Jeff VanderMeer respectively — and what's difficult about writing this review is that they've said what I wanted to say when it comes to Angela Slatter's Sourdough and Other Stories. The former sets the tone for the collection, while the latter captures what makes Slatter's writing unique and refreshing. I'll steal a line from VanderMeer:


"You could call what she's created her 'take' on folk-tales, but I think that's too limiting. She's not just riffing off of what's gone before but creating something new that's less stylised and more three-dimensional."

Whether it's anthologies or collections, chronology is important. There's a rationale behind the editor's — or in this case, author's — choice. The opening story, "The Shadow Tree," is brief but quickly sets expectations for the stories to come, conveying the atmosphere of a dark fairy tale. More importantly, it hints that this could be something along the lines of Arabian Nights, with Slatter acting as a modern Scheherazade. That's not quite the case when the reader gets to the second story, but that concept resurfaces as the collection progresses. To a certain extent, Sourdough and Other Stories feels more like a mosaic because of the interconnectedness; part of the pleasure of rereading the book is discovering all sorts of links between the stories. And here's what's brilliant: some writers simply order the related stories consecutively. If the reader isn't paying attention, they can miss out on the fact that the minor characters in the current story were the main characters from the second story that preceded it. The stories actually work quite well independently. However, there'll always be that extra layer between the reader's imagination and the gap between stories, which Slatter stimulates. The power of the final story in the book, "Under the Mountain," is that it's propelled by everything else that came before it, much like a rollercoaster that's reached its apex before the steep descent. Thematically, it also goes back to what was established in "The Shadow Tree," and an example of how the collection is greater than the sum of its parts.

Slatter also manages to strike the balance between maintaining tone without losing the reader's interest. One glaring flaw of Lovecraft's collections is that after the third story or so, it's likely that the reader will get bored due to the formula and repetitiveness of his style. Here, there's always something new to look forward to, yet each story still follows the established framework. Related to that is there's no weak story in the collection: every piece, from start to finish, is excellent. Forget mediocrity, these stories are enough to rekindle a jaded reader's interest. Good writers are able to write a great story; doing several of them, while still retaining the same motif, and then delivering something more, is a feat few writers can claim.

When it comes to themes, there's always this sense of darkness that's missing from many of today's sanitized fairy tales. Slatter isn't being cruel to stand out, but the tragedy and hubris feels natural and organic, a necessity rather than narrative contrivance. That's not to say there are no happy endings here, but they come at a steep price. Nor are the stories feeble attempts at didactic moralization. Slatter's protagonists are also female, embracing the adversities they encounter and using it to fuel their metamorphosis. Even as they commit selfish acts, the readers understand their motivation, and sympathizes with them. It's that delicate balance that propels her stories from being pastiches and homages to something uniquely Slatter.

I came upon Sourdough and Other Stories at the dealer's room during World Fantasy Convention 2011. It was expensive, competing with my budget for other rare books like those published by PS Publishing. But I bought it, and having read read it, I feel I underpaid for it. Readers — genre fans or otherwise — should read Angela Slatter's fiction. Discovering her book is the equivalent of realizing you've fallen for your best friend: they've been there all this time, it's only recently that you've noticed their great qualities, and there's still time to re-assess your original appraisal.
Posted by Charles at 12:46 AM