Book Review: Engines of Desire: Tales of Love & Other Horrors by Livia Llewellyn 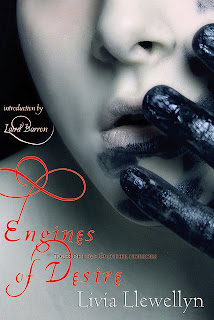 I want to begin this review with a digression: what makes a great James Bond actor? Arguably, the best in the film's franchise, whether it's Sean Connery or Daniel Craig (sorry Pierce Brosnan), is due to their unpredictability. Despite their charm, there's always this sense that they can murder you without a moment's hesitation. This element isn't limited to what's written on the script but extends to the charisma, personality, and believability of the actor. I bring this up because one recurring motif in Livia Llewellyn's stories is the way she writes her characters: they are compelling protagonists, but the reader is never quite sure whether they should ally — I use the term because they automatically win the reader's sympathy — with them or fear them. In most cases, it's both, and it's amazing how Llewellyn conveys this through prose — without the aid of actors.

As a collection, Engines of Desire is aptly titled. There's a certain roughness when it comes to the word "engine" but it's also workman-like and efficient. Llewellyn's prose isn't perfect as there's bits here and there that could be polished, but overall, it gets the job done. The inclusion of desire, on the other hand, is what separates the author from her peers, as it is a common element in most of Llewellyn's stories. If the topic was Lovecraft's bane, the author incorporates it into her narrative and channels it into something primal that triggers our collective lizard-brain. It's sensual, yes, but just like her protagonists, one must always question whether surrendering to it is safe. The image that springs to mind when describing this collection is that of an Ouroboros: the narrative is engaging, but it also fuel for what comes next, thus creating this cycle of satisfaction and hunger.

There are ten stories in this book and the only time the author falters for me is "Brimstone Orange" mainly due to its length. One would argue that the other flash fiction piece in the collection, "Teslated Salishan Evergreen," should suffer such a fate, but its parameters are well-defined (a faux encyclopedic entry on a fictional plant) and the concept is executed perfectly. When it comes to must-reads, it's a tie between "At the Edge of Ellensburg" and "Jetsam". Both contain elements of what makes Llewellyn terrific and unique: forbidden passion, characters that are double-edged, and a darkness that simultaneously destroys and saves. Thematically, the two stories are different from each other, but both bear the distinction of a Llewellyn story without the heavy-handedness of Lovecraft pastiches. "Her Deepness," a lengthy, fantastical (steampunkish?) piece, is similarly engaging, although it lacks a certain level of eroticism that marks her other stories.  Still, it's a memorable story that digs deep into one's inner darkness, both literally and figuratively. The titular story, "Engines of Desire," is nothing to shrug off, and it's an interesting technique that showcases why O. Henry-type stories aren't necessarily to be praised: Llewellyn reveals her hand early on and it's the character's motivation that piques the reader's curiosity.

While Llewellyn's writing can be demure when it needs to be, for the most part, it's seldom elegant, and that's the potency of the author's technique. Imagine the word "fuck" for example, and while other writers might use it to simply insult, Llewellyn's apt usage is such that it both seduces and kicks the reader in the groin. The author is unapologetic when it comes to Engines of Desire, and to read such a collection is to know corrupted passion. Such base emotions are seldom spoken in polite company, and that's where this book revels in.
Posted by Charles at 12:48 PM