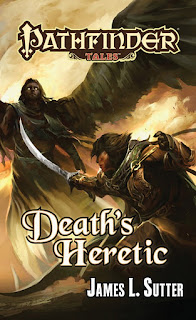 Neither crime nor mystery is alien to speculative fiction: most of the novels in Isaac Asimov's Robot series, for example, are mysteries, or at the very least, logic puzzles (this is also true for the Foundation stories). So it's not surprising to see those kind of elements in more recent novels like The City and The City by China Mieville, or Zoo City by Lauren Beukes. Death's Heretic follows that vein of mystery-in-my-fantasy but to anyone who's Game Mastered a Dungeons & Dragon's game, the concept isn't so far fetched: the constraints are all there, the Game Master simply has to make sure they follow all the rules. Of course the elements of what makes a great game doesn't necessarily translate to fiction and James L. Sutter has a handle on that. When we think about stories set in a Dungeons & Dragons setting (or in this case, Pathfinder's Golarion), one element that frequently comes to mind is the concept of the adventuring party. Sutter eschews that approach — and he's not the first one to do so either — and goes for a more focused narrative. Death's Heretic revolves around Salim Ghadafar, a warrior that's coerced into the service of a death goddess.

From a perspective of craft, Sutter is transparent when it comes to technique. The template, especially with the formula for most mysteries, is evident. The author doesn't abuse this, however, and makes every scene interesting, whether it's complex suspects or interesting vistas. The key here is that Sutter doesn't repeat himself, and maintains the momentum he's established. As far as the story is concerned, the only qualm I have is when Salim finally encounters the culprit of the crime. The author breaks consistency with what was previously established, not to the point that it disrupts the plot, but it is a bit jolting if the reader remembers the details from the previous scene.

A lot of the appeal of Death's Heretic stems from Sutter's protagonist, Salim. Dungeons & Dragons — hence Pathfinder — has a cosmology where the objective existence of deities can be proven. Salim professes to be an atheist and that's tricky to pull off, given the assumptions of the setting. But neither is this a propaganda tract as Sutter does justice when it comes to the portrayal of the other side. What's compelling is that the premise establishes complications and conflict, and the dynamic there is played up. Salim isn't simply a lone wolf archetype, but a genuine, fleshed-out character.

For the most part, Death's Heretic channels the spirit of classic sword & sorcery, adapts it for a modern audience, and is sprinkled with Sutter's personal touch. It makes for fast, leisurely reading, the equivalent of a summer blockbuster movie for speculative fiction.
Posted by Charles at 12:08 AM