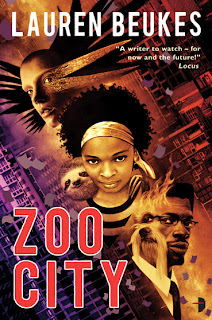 There are novels that defy categorization: they don't fit into common marketing conventions, or at the very least, aren't limited to the stereotypes associated with their genre. The prose of Zoo City wasn't immediately striking — its appeal to me was due to an entirely different reason — but there's skill in it being plain. And perhaps that's the paradox here. There's so much going on in Zoo City: it's science fiction, it's fantasy, it's crime... but the narrative is focused, down-to-earth, and ultimately, the conceit doesn't get in the way of telling an actual story. Lauren Beukes writes a complete, solid novel, and while some writers mask their weaknesses with style, Beukes allows her text stand on its own, guiltless in front of a jury.

What is memorable, however, is how there's this continuous interaction with the reader even once you've put the book down. I've spent the past few days pondering on the possibilities of Zoo City fan fiction, and it's not everyday that such a story inspires me so. Nonwriters might simply dismiss this as the concept, the same way that they might approach an author and offer to sell them an "idea" they had. But that's not truly the case, as it's Beukes's execution (in this case, conscious restraint) that makes the novel work. I've heard comparisons to Philip Pullman's Golden Compass but I think those conclusions are unfair because the animal companions — for lack of a better term — behave differently in each novel (the social implications alone are different). There is also the way that Beukes hints, insinuates, and implies a larger backstory, but never tips her hand. In that sense, Zoo City feels like a realist novel, as the reader remains ignorant of the underlying cosmology of the world by the time they reach the end. Instead, the anchor to the narrative is the central protagonist, and her ending isn't a convenient resolution.

In terms of technique, Beukes utilizes elements of the epistolary novel to great effect. They feel authentic and modern; whether they'll date themselves in the future is best left to speculation, but as far as the present is concerned, it's well done. Nor do I feel, at any point, that they are extraneous. The inclusion is justified and again, Beukes doesn't jump at every opportunity to insert news clipping, emails, or letters. There's a compelling reason for their place in the story, and the author includes just enough to whet your appetite without breaking the momentum.

Perhaps a key element in describing Beukes's style in Zoo City is restraint. The author never feels insecure about their technique or the reader's intelligence. What you end up with is this polished novel that's clear, concise, and imaginative, without drawing too much attention to its uniqueness. That might be a detraction for some narratives but in the case of Zoo City, it works.
Posted by Charles at 12:21 AM