Book Review: Under the Moons of Mars edited by John Joseph Adams 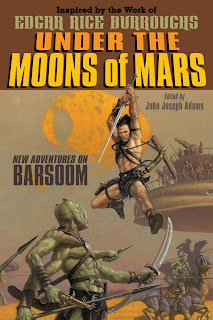 A decade ago, I still sought classic science fiction and fantasy texts, such as Heinlein and Saberhagen. Unfortunately, while some works were readable, several failed to withstand the test of time, whether due to a readership that has grown and matured, or simply because of outdated norms. I never got to read Edgar Rice Burroughs's Barsoom series, nor do I have the inclination to do so, since it's probably one of those works that fall under the latter (problematic probably doesn't even begin to describe it). Still, with the Barsoom series celebrating its centennial this year — along with the coinciding movie debut John Carter — I picked up Under the Moons of Mars without knowing anything about Barsoom save for the premise, and simply trusting John Joseph Adams and the anthology's contributors.

Those sharing my plight have nothing to fear. Under the Moons of Mars works even without prior knowledge of Burroughs's fiction, and those that are baffled can consult the Appendix by Richard A. Lupoff (never needed it). As an anthology, the book has an interesting structure, because it's entertaining and convincing, and this is coming from a reader who doesn't romanticize Burroughs. No story feels derivative, and each one explores a different facet of Barsoom's cosmology (it's surprising how many of the stories don't feature John Carter as a main character). This, in fact, ties in to what makes the politics of Barsoom problematic, although it is not without its own redeeming qualities, as pointed out by Tamora Pierce in the Foreword. Some stories book subvert and modernize the mythos — and more importantly, does so in an engaging fashion — which is what makes them stand-out: "The Ape-Man of Mars" by Peter S. Beagle, "Vengeance of Mars" by Robin Wasserman, "Woola's Song" by Theodora Goss, "A Game of Mars" by Genevieve Valentine, "A Sidekick of Mars" by Garth Nix, and "Coming of Age on Barsoom" by Catherynne M. Valente for example. Their equivalent is the contribution of John Gardner's Grendel and Marion Zimmer Bradley's Mists of Avalon to Beowulf and Le Morte d'Arthur respectively. Other stories, on the other hand, remain distinctly the author's own while still being faithful to the conventions of the milieu: "A Tinker of Warhoon" tackles some of the themes Tobias S. Buckell has written in his other works, while Valente's piece is distinctly Valente, even as she makes herself part of the story.

Each story is also accompanied by an illustration. They are a welcome visual, especially for Barsoom's propensity for alien physiques, but some of the artwork would have been more impressive had they been rendered in color. (A lot work well with the black and white medium.)

I won't lie. Under the Moons of Mars has a tough constraint to work with, and the authors make the most out of that framework. The stories in this anthology are fun and interesting, perhaps the same emotions evoked by fans who read Edgar Rice Burroughs in their childhood. I wouldn't label them as the best of the best, but the inner child in me is gleeful when I read about a standoff between John Carter and Tarzan, or discover the secret habits of calots (they need their own plushie...).
Posted by Charles at 12:11 AM