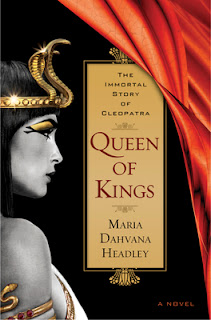 Some novels take time to develop: it can be front-loaded exposition or a scenic tour of the book's setting. What's striking about Queen of Kings is Maria Dahvana Headley eschews that method and delivers a story that dives immediately into the action and never gives the reader time to catch their breath. It's one exciting scene after another, making this a quick read that can't be put down.

It's a common misconception that the appeal of a story is its concept — in this case, the secret history of a shapeshifting, blood-drinking Cleopatra. While that's a reasonable elevator pitch, what makes the novel work is Headley's conscious decisions with technique. First, the chapters are quick and short, and while the descriptions can get sparse, it follows the narrative's agenda of getting to the exciting bits as soon as possible. Second, the author has an awareness of her genre's strengths and weaknesses. The introduction of certain characters like the senate or Virgil might appear abrupt, but since this is historical fantasy, the reader is equipped with knowledge of these personalities so their presence feels natural — if not outright warranted by the reader. On the other hand, characters that are new to the story are given their proper introduction, but just enough so that it doesn't bog down the narrative. By most accounts, Headley exercises brevity, and it's a practice that's in the service of the story.

The third element that makes Queen of Kings such an enticing read is the way the author tackles conflict. In many traditional narratives, high fantasy included, there is the sense that the reader knows how it's all going to end. One reason for this is that conflict — and war — tends to be polarized: you have the protagonist's side and the opposing side, usually good vs. evil. That's not the case in Queen of Kings as there are numerous agendas in play at any given time so it's not even a two-front war but sheer chaos. It even comes to a point where the reader isn't sure whether they should be rooting for a particular character or not. What's impressive with Headley is that while some authors might hold back, whether in creating too many factions or simply the lengths the various characters will go to, here it all seems like an organic progression that keeps the reader guessing. Is it contrived? Of course, it is, and Headley even scores bonus points when it comes to aligning the narrative with known history, but what's satisfactory is that it never seems manufactured. Contributing to this is the continuous sense of confusion among the characters, especially early in the novel, where their perception is different from what's objectively taking place. We've seen it utilized to great effect in epic fantasies like The Wheel of Time or A Song of Ice and Fire, but all Headley needs is a few pages and two chapters to illustrate contrasting views of the same incident. There are other techniques which Headley uses such as juxtaposition, but for the most part, it's the author's ability to weave the illusion of chaos that sets the book apart.

In Queen of Kings, the reader never knows what's going to happen next as alliances are made left and right, along with betrayals and double-crosses that go hand in hand with them. The presence of history and mythology is also a resource the author mines, which makes its inclusion a rational and seeded solution. Maria Dahvana Headley writes a focused, compelling narrative that excels in what it's supposed to do, and is a great example of synergy with authorial intent.
Posted by Charles at 12:07 AM

Sounds right up my alley.