Book Review: Song of the Serpent by Hugh Matthews 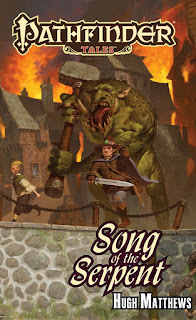 If there is an argument for character vs. plot (although there is no shortage of plot in the book), Song of the Serpent by Hugh Matthews should be the textbook example. The appeal of the novel is its protagonist, Kunzle the Quick. In many ways, he is the stereotypical thief: quick-witted, cowardly, and an opportunist. The problem of lesser writers, however, is actually conveying those three qualities to the reader. Kunzle is easily one of the most charming characters I've read recently (he's charming to the reader; people who meet him hate his guts) and carries the narrative forward as he injects levity and entertainment without jolting the reader from the seriousness of the circumstance. The strength of Matthews's writing is that his characters have this sense of vulnerability: Kunzle is hardly the best thief in the business, and that can be said for his companions — or the antagonists in the story. This is media tie-in fiction but it's hardly one where the protagonists are invincible.

What readers need to know about the Pathfinder Tales line is that it's Dungeons & Dragons with the serial numbers filed off. There's an appendix at the back but honestly, it's unnecessary, mainly because the narrative follows the best practices for telling a story, and most of the fantasy references like dwarves and orcs have become part of the zeitgeist. Matthews writes a compelling beginning, and it's enough to pique the reader's interest. Matthews's alter-ego has professed his interest in Jack Vance and the novel captures the atmosphere of the stories of the Dying Earth series, albeit modernized and adapted for Pathfinder's setting.

One problem with Song of the Serpent is that the tone shifts in the middle of the book: while the battle scene is competent, it detracts from the character-centric development and slows down the momentum. Because Kunzle is easily the most fleshed-out character, whenever the spotlight drifts away from him diminishes the reader's interest. While his solo adventures were fun to read, towards the end of the book, he's surrounded by companions — not quite the standard adventuring party — and while they have their own quirks and foibles, they're not as remarkable as Kunzle. Only the ambitious troll comes close to matching the thief's personality.

That's also not to downplay the impact of the mystery surrounding the various characters, which Matthews brings to a satisfying conclusion. What starts out as a rescue-the-princess story evolves into something more convoluted, and that's not necessarily a bad thing. Whatever weaknesses Song of the Serpent has is redeemed by the last line of the novel, which stays true to the characterization of Kunzle. It's a punchline, yes, but it's an entertaining one.
Posted by Charles at 9:00 AM