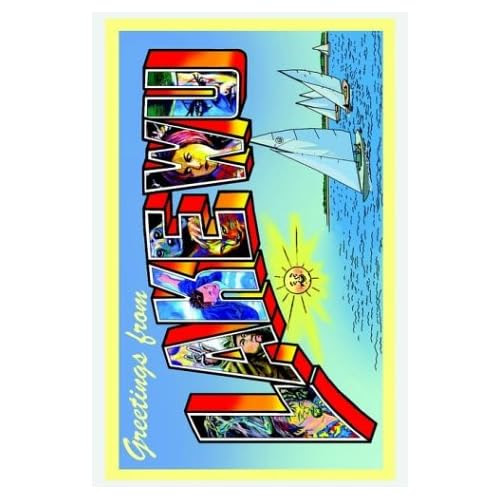 Greetings from Lake Wu is a collaboration between Jay Lake and Frank Wu, with the former writing the short stories and the latter illustrating them. Wu's art can be found preceding each story (there are thirteen in this collection) and his style has an old-school feel to it. Lake on the other hand struts his early work here and I find it amusing that the book begins and ends with stories that have a similar title ("The Courtesy of Guests" and "The Passing of Guests" respectively) and feature the same set of characters. As far as the fiction goes, most of the stories have a sci-fi angle and while Lake writes them competently, only a few possessed the impact I was expecting from Lake (but those that do pack a whallop). Having said that, here are my top three stories. "Jack's House" stands out the most to me, in part due to its accessibility and the mythic scope it encompasses. Rats, cats, and dogs are all involved in a war and the story works on many levels. "The Angle of My Dreams" on the other hand succeeds because of Lake's strong grasp of character and easily had me sympathizing with the protagonist. I was almost crying by the time I reached the end. "Glass: A Love Story" is one of those weird tales that only speculative fiction can deliver. It promises on the romance but in an unexpected manner and was quite an adventurous trip. One complaint I have about the book is with its production quality. At least in the case of my copy, the ink was smudging, either on my fingers or on the opposite page so I felt like I had to read the entire book before the text faded before my eyes. Aside from that, Greetings from Lake Wu is a decent collection of short stories that gains bonus points if you enjoy Wu's art style.