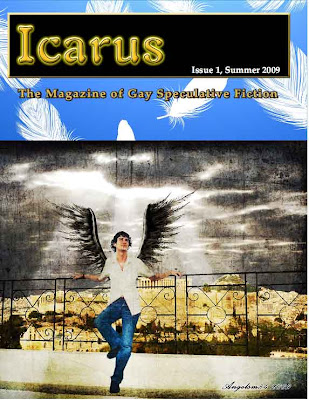 What I love about speculative fiction is its limitless possibilities yet despite all that potential, what actually gets published are material that conform to the traditional mores and culture of society. There's a lot of more awareness of various "causes" in the genre these days, from a balanced representation of women to support for people of color. In the case of Icarus, publisher Steve Berman steps up and launches a magazine of gay speculative fiction.

The publication contains everything from fiction, essays, poetry, interviews, and book reviews. Perhaps one thing that should be noted is that this is published by Lethe Press and there's a lot of material here that is related to their books and authors. Not that it's undeserved, considering Lethe does publish a good chunk of the gay speculative fiction material, nor is this fact hidden (and is actually immediately evident in the first few pages), but it's something readers should be prepared for.

There are two things I want to tackle when it comes to Icarus. Barring the fiction and Jeff Mann's essay, the rest of the magazine is satisfactory. The reviews for example are honest but there's nothing really striking to make them noteworthy. The interviews do their job of conveying information and while they're not boring, they're similarly not as exciting as I want them to be. The art will polarize you: on one hand, they're obviously gay with the stereotypical use of naked or semi-naked men. However, because of that branding, there's also no mistaking who the target audience of this publication is. But in retrospect, this shouldn't be too much of a problem as there's not much original art in the magazine, while the other images are from advertisements.

While I'm complacent about those features of the magazine, the second thing I want to talk about is the fiction. There's a clear focus in the editorial to feature stories that include gay characters and gay themes, instead of simply stories written by gay authors (and you can find a lot of those in other magazines). But here's the clincher for me: I'm a straight guy and all three stories included in the magazine are quite solid--more than capable of standing toe-to-toe with the fiction in other genre publications. They're definitely worth a look irregardless of whether you're a fan of gay fiction or not.

One of the pieces that immediately caught my eye is Jeff Mann's "Watching Dark Shadows". Now because of the way it's presented, I'm not quite sure whether this is an excerpt from his book Edge or even if it's fiction (I later assume it to be an autobiographical essay) but that aside, this is a powerful text that kept me reading. Mann recounts his fascination with the show Dark Shadows and how it's the perfect metaphor for his gay persona. What's interesting with this essay is that there's a solid narrative behind it and Mann knows how to hit the right beats so that it's compelling all throughout. For me, this isn't so much a piece on being a gay person but more on simply being a person who's a fan of genre. That's not to rob it of its gay element, but it goes to show how growing up, we're all face dilemmas irregardless of our sexual orientation, and that we can be united by our hobbies and passions.

As for the fiction, there are three stories that should be discussed. "The Willow Pattern" by Joel D. Lane is focused on characterization and honestly wouldn't work if you're not invested in the character or their history. Lane sells us that through a traditional but well-executed method of storytelling. I could end my review there but where Lane innovates is how the speculative element creeps into the narrative, an apt metaphor for the experience of our main character. One can interpret it literally or otherwise without losing the impact or gravity.

"Man in the Mirror" by Jameson Currier is well-written and while the plot isn't anything to celebrate, it's how the author tells his narrative that his writing is to be praised. Right from the very start, Currier creates a compelling hook and makes us wonder at the bizarre situation of our protagonist. Slowly by slowly, we peel the layers off and there's a point where it's reminiscent of A Christmas Carol.

"Lightning Capital" by Tom Cardamone is this right mix of coming-of-age story combined with speculative fiction elements. The telling details are commendable and is one of the methods in which Cardamone sells us the setting. The narrative feels very real and perhaps even confessional, but at the same time doesn't lose focus of his target audience. Some readers might find the ending too much on the punchline side, but for me it works in the context of a young adult reader, and is a perfect fit for the kind of tension the author build up.

The story and nonfiction selection of Icarus really sold me, a treat that stands well on their own and not just relying on the "I'm gay speculative fiction" clause, at the same time making the most out of the theme. For gay readers, this is a venue to nurture and hopefully one that'll last and evolve in the coming years. The magazine isn't perfect, but it has a sturdy backbone when it comes to content.
Posted by Charles at 6:12 AM

Thank you, Charles, for all the kind words. I'm really pleased you enjoyed the issue. I hope I can continue to do so.