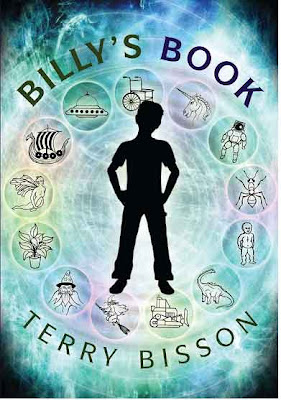 In many ways, Billy's Book is this weird animal and it's understandable if it polarizes readers. The book collects Terry Bisson's "Billy" stories--flash fiction using a young adult tone that recounts the adventures of Billy. Each piece can stand on its own but when reading them all in one sitting, it becomes evident how Bisson builds upon the previous stories in an absurd continuity not dissimilar from the cartoon comedy South Park.

Perhaps the biggest argument against this book is its simplistic plot but that in itself is deceptive. While there's no denying the relative lightness of each story, it's also a venue for Bisson to showcase his other talents. His dialogue, for example, remains compelling and upbeat, sustaining the narrative and there's something bizarre and funny when repetition comes into play.

There's a gradual progression in Billy's Book. The first story, "Billy And The Ants," for example, features Billy, his mom, and the ants. Later on, the cast evolves to Billy, his mother, his father, and the "guest-of-the-week", which might be anyone from his neighbor to a talking plant. It's remarkable how Bisson makes the continuity work--you have to read it to understand what I mean--and how he keeps it fresh each time.

The stories in Billy's Book actually make good use of formula and subvert what one expects in a children's story. In certain ways, this is the perfect length for PS Publishing because I don't know how long it would have sustained my interest had the collection been novel-length but as it is, it's a memorable novelty.
Posted by Charles at 5:54 AM