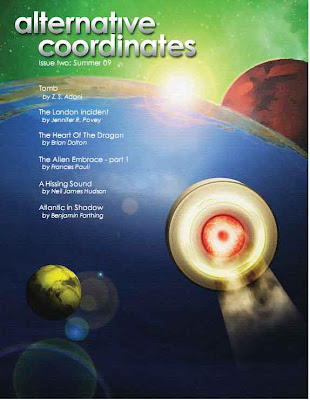 Alternative Coordinates is a relatively new magazine focused on fantasy, science fiction, horror, and speculative fiction. This issue features all of those genres, although all save one have an element of science fiction. There are six stories in the magazine but one of them ends in a cliffhanger and continues in the subsequent issue. As far as I'm concerned, the selection isn't bad--nothing particularly wrong with them--but they're not as striking either. That's not to say that they're not enjoyable, and there's nothing wrong with simply being good enough, but they're not by any means material that every hardcore fan should read.

The opening piece is "Tomb" by Z.S. Adani. Right from the get-go, the reader is aware of what kind of story this is. Adani's focus are on the characters, and the reader has a competent investment in them. While there's a core science fiction mystery present that needs to be solved, for me it's not as satisfying as the emotional ringer the protagonists are forced to endure. Overall, it's not bad, but the story takes some time before it starts to pick up.

The next story is "The London Incident" by Jennifer R. Povey and features a more upbeat pace. In certain ways, this is a more accessible story despite the usage of hard science fiction concepts. The heroine's motivation is sympathetic and the narrative follows a certain formula that the ending is predictable, although how this is accomplished is what retains our interests.

"The Heart of the Dragon" by Brian Dalton is the lone fantasy piece but in certain ways it channels the spirit of philosophical science fiction as a good chunk of the story is spent on debate and tackling a single idea. The story is easy to get into and the tone is appropriate for the story it's telling. One point of consternation is how this story is a bit too expository, especially when it comes to the emotions the main character is feeling, but given the length, some allowances need to be given. Personally, I wish the story was longer, the themes tightened and explored more.

"The Alien Embrace - Part I" by Frances Pauli is difficult to evaluate since it's only half of the story. As far as piquing my curiosity and ending at an interesting junction, then the story succeeds. So far, her characters are well developed and dynamic. Whether she can sustain this depth remains to be seen.

"A Hissing Sound" by Neil James Hudson is one of those punchline stories and while some readers might be disappointed in that, I'm not. The author uses an interesting concept here--aliens as call center agents--and there's a mix of both comedy and horror here. While perhaps not the strongest piece in terms of technical craft, this was delightful and fun to read.

"Atlantic in Shadow" by Benjamin Farthing is another melding of science fiction and horror. Personally, it doesn't really stand out and there were beats that became predictable. Farthing tries to make us sympathetic towards the characters near the end but the revelation arrives too late and would have been better had it been seeded earlier. The story feels too safe for my tastes and ends up simply being a satisfactory read.
Posted by Charles at 6:23 AM