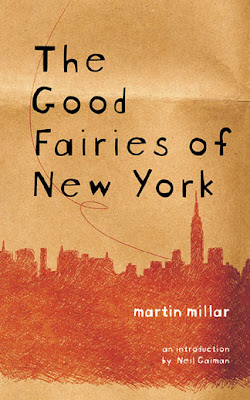 Martin Millar wrote a series of books about Thraxas under the pseudonym of Martin Scott. His first novel, Milk, Sulphate and Alby Starvation, came out in 1987. He's had around 16 books published.

Hi! Thanks for agreeing to do the interview. First off, what projects are you currently working on?

I’m writing a sequel to Lonely Werewolf Girl. This is coming along rather slowly, but fairly steadily.

I have thoughts about writing a ninth Thraxas novel, but I’m not sure about this.

Backtracking a bit, what made you decide to write fantasy?

Probably the Elric books by Michael Moorcock, and also Lord of the Rings, which I liked when I was young. But I didn’t start off writing fantasy, I started off writing about my surroundings in Brixton, South London, in the post punk days of the late 70s and early 80s.

My favourite fantasy authors when I was young were Michael Moorcroft, and also Anne McCaffrey, her Dragon Rider books. If I was listing my favourite authors as an adult, it wouldn’t be very fantasy orientated (though I did enjoy Harry Potter) I like reading Ancient History, meaning both modern books about the ancient world, and the works of ancient authors. Among ancient authors my favourites are Cicero and Livy, both Romans, and Plato, and Athenian Greek. My favourite novelists would be Jane Austen and Charles Dickens, and my favourite humorous writer is PG Wodehouse, who wrote about Jeeves and Wooster.

In general, I’m not certain that it’s a good thing for a modern novelist to read other modern novelists, and I tend to shy away from it. I don’t mind if I end up being influenced by (and possibly lifting the occasional idea from ) Charles Dickens, but I don’t want to end up doing this from a contemporary writer.

However, I do read modern fantasy in the form of manga, and sometimes comics. I like Naruto and Bleach, and I just finished a newer Manga called Steel-Fist Riku which I really enjoyed. In my late teenage years, I read a lot of Marvel comics, notably Conan and Spiderman.

In some of your books, rock and roll occupies a section of the narrative. What kind of impact has music had in your life? What kind of music do you listen to nowadays?

Music had a big impact, and if I’m asked for my literary influences, books alone don’t really cover it. As a young teenager I was a big rock fan, particularly Led Zeppelin, (which I wrote about in ‘Suzy, Led Zeppelin and Me) Right after this, punk rock erupted in Britain and that had a great effect on me. I have never lost the punk ethic of doing things for yourself, and trusting in your own opinions. So, the Sex Pistols were very important to my writing career. In the same way they just decided that they were going to be in a band, no matter what other people thought, I decided that I’d go ahead and write books, without worrying too much about anyone else’s opinion. I probably wouldn’t have had the confidence to write my own novels if it hadn’t been for punk rock.

These days I listen to rock music, though it tends to be things I remember from earlier in my life, rather than new music. I listen to classical music a lot , and the most contemporary thing I could think of that I’ve listened to recently would be the Japanese Techno of Aural Vampire.

What kind of challenges did you run into before establishing your career as a professional author?

Finding a publisher was very difficult. I was quite fortunate to find an agent reasonably quickly, she liked the book I sent her. But it took her three years to find a publisher. It was fortunate for me she was a determined agent, I’d have given up by then.

In pre-internet days, artists could feel more isolated, I think, and there was no sort of network to help a person get published. So you just sent your manuscript off to an agent and hoped for the best, and if it was rejected, that was it really, you were finished. These days. I think it might be a little easier, there is at least a lot of information and a lot of support on the internet.

Before I was published, I was either unemployed, or working in a series of dead-end jobs. But I don’t know if that was a challenge or not, I was young, I didn’t mind that I didn’t have any sort of career. But it’s fortunate that I managed to get published when I did, otherwise I might look back with regret on not embarking on some sort of career.

In your novels like The Good Fairies of New York and Lonely Werewolf Girl, there's much humor in the tone and in the narrative. What made you decide to focus on the comedy? Does it come naturally to you or do you have to work at it?

I comes naturally. I don’t know why, but I seem incapable of writing anything which is entirely serious. However, it does take a lot of effort to construct your sentences properly, to make them funny on the page. For this, I’ve always been inspired by PG Wodehouse, who was a very funny author, and a master of humorous dialogue.

I find that you have a definite writing style which tends to be economical and brief. Was this conscious and how did you go about developing your voice?

Yes. I refine it down towards simplicity. I prefer my writing to be relatively unadorned. My attention span is relatively short, and I’m expecting my readers’ attention spans to be the same. So it helps to keep things simple, and moving along quickly. In this, I was partly inspired by Kurt Vonnegut, particularly his ‘Breakfast of Champions.’

In your opinion, how have you improved as a writer, at least comparing your earliest books to the one you're working on right now?

I would be very hard to say myself how I’ve improved, though I feel that I have. I’ve developed better judgement over the years, and I know what is appropriate to the story, and what isn’t.

I don’t much enjoy looking at my early books these days. I always think they could have been much better. On the other hand, while I feel I'm a better writer now, I don’t have the energy I used to, and writing takes longer.

What was it like working on the novelization of a film? Was the experience mostly positive or negative?

Mixed. Bad points – I didn’t like the script I had to make into a novel, and I had very little time to do it. Plus points, they paid me very well.

How did Soft Skull Press end up publishing several of your books in America? How about Tor and The Good Fairies of New York?

Largely because of the introduction to The Good Fairies of New York, written by Neil Gaiman. Once Neil Gaiman wrote that introduction (my agent Malcolm Imrie was responsible for making this happen) publishers became much keener to publish the book. I had been rejected before by America publishers, and was in fact out of print in Britain when Soft Skull picked it up. So Neil’s introduction has been a great help, both in America and other countries. Once the Good Fairies was a success for Soft Skull, they were keen to publish my new book, Lonely Werewolf girl. As that also did well, they decided to pick up my backlist. So this has all been a good step forward for me.

How does it feel to have been published in many different languages?

Why are you popular in Germany?

I’m not certain. However, The Good Fairies of New York has never been out of print there, and all the Thraxas novels were published there. I’ve made a good sale of Lonely Werewolf Girl to Fischer in Germany, and they’re a big publisher. It will come out there in June, under the title of ‘ Kalix. Werwölfin von London.’

How did you end up working on Lux and Alby Sign on and Save the Universe?

Someone who worked in a comic shop in Brixton ran a small press for comics, and it was his suggestion. However, that project ran through various different publishers before coming out originally as nine comics, which were later gathered into the graphic novel. The person at the comic shop introduced me to Simon Fraser, the artist. It was his first major commission, as I remember. He’s gone on to be a successful comic artist, and has written a lot for 2000AD, particularly Nikolai Dante. And it was Simon who drew the cover for Lonely Werewolf Girl.

How different is writing a graphic novel from writing short stories or novels?

Not all that different, really. There’s a difference in technique, with panel captions and so on, but if you make an interesting story and write some interesting characters, and it should go well enough, just like a novel.

Do you plan or want to write more comics in the future?

Yes, if I had time, or had more energy. Actually, I have been thinking of doing a follow-up to The Good Fairies of new York as a graphic novel, but this hasn’t made it past the planning stage yet.

What made you decide to out yourself from your pseudonym Martin Scott?

I did that very quickly, almost as soon as the first Thraxas book came out. There didn’t seem any reason to keep my identity secret. I’m not sure there was any real reason to use a pseudonym in the first place., though the publisher thought it was a good idea, as the Thraxas novels were different from the books I’d been writing up till then.

What advice would your modern self give to Martin Millar from two decades ago?

Be more confident. It took me far too long to get over my teenage shyness. I managed eventually.

Any advice for aspiring writers?

Don’t waste your time showing your writing to friends, looking for approval. Just have confidence in your own abilities, and write what you want to write. Try to write something every day. It helps if you can develop a rhythm, and if you can write even when you’re not feeling like it, you often come up with something good anyway.

Also, try to find an agent. It makes life much easier. Publishers have always been far more likely to give proper consideration to manuscripts that arrive from an agent. (Unless this has changed in the modern world. I’m not really a part of any publishing group, or writers’ circle, so even though I’ve been published for 20 years, I don’t know that much about the business of publishing. I don’t have any literary friends, either writers of publishers.)

No, nothing at the moment. When I’m finished the sequel to Lonely Werewolf Girl, I’ll be keen on plugging that, but that will be a while yet.
Posted by Charles at 6:12 AM