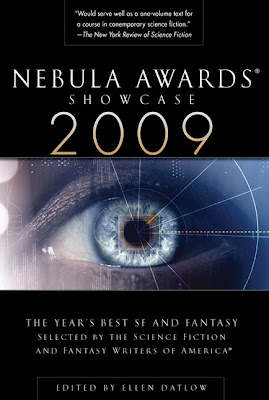 To be honest, The Nebula Awards Showcase was one of those anthologies that I ignored. Partially, it was because they tended to include novel excerpts, and there was a time when I frowned upon such a practice (the excerpt would never do the novel justice!), and so I erroneously associated "excerpts" with the book. The other reason was because I felt I was better served by other anthologies, along the lines of The Year's Best Fantasy and Horror, which wasn't limited to the award-winners (another erroneous preconception on my part). As life would have it, however, there were two reasons that finally nudged me to purchase a copy.

The first reason is that the Nebula Awards Showcase 2009 is edited by Ellen Datlow, a favorite editor whose tastes I trust. The second and more self-serving one is that I was conscripted to conduct interviews for the Nebula Awards website last year (I'm currently in charge of the site's content but that's another story...) and I thought it would be best if I supported the organization that gave me an opportunity.

I'm glad I did because the anthology wasn't what I expected, in a good way. Included in the book, of course, are the works that won in the 2007 awards and that's an accomplishment in itself. The 2007 was fortunate for me because I genuinely enjoyed all the winners and even the excerpt of Michael Chabon's The Yiddish Policemen's Union was handled in such a manner that while it didn't stand well on its own, captured your interest. That's not all there is to this anthology, however, for if that were the case, this would be a very slim book and didn't necessitate Datlow's presence.

Where the Nebula Awards Showcase 2009 truly shines is everything else. Of course, there's the usual SFWA stuff which may (if you're a writer) or may not (if you're a casual reader) interest you. Beyond that, there's the selection of nonfiction articles and various tributes, a lot of which are interesting reads. For example, there's Kathleen Ann Goonan on "Why I Write Science Fiction" (which should be self-explanatory) and Ellen Asher on her experiences as editor of the Science Fiction Book Club in "Clubbing". You also get a summation of the fantasy and science fiction films during the year in "What You Saw Was What You Got: The Year in Films" by Howard Waldrop and it's a stark contrast to the summation in The Year's Best Fantasy and Horror as this one has attitude and personality (sometimes at the cost of being informative). The tributes are also to be lauded, whether we're talking about Guillermo del Toro or Ardath Mayhar (Michael Moorcock gets a tribute AND a short story).

Then there's the fiction and--let us not forget--the poetry. Because the latter is quicker, I'll tackle it first. The anthology includes the Rhysling Award winners, which includes the Dwarf Stars Award (Jane Yolen's "Last Unicorn"), Short Poem Award (Rich Ristow's "The Graven Idol's Godheart"), and Long Poem Award (Mike Allen's "The Journey to Kailash"). The Rhyslings are all lumped in one section so it's easily avoidable if you have no interest in them but it was an enjoyable read for me and a welcome break from all the fiction/nonfiction. Not much to complain about but I'm also not aware of its fellow nominees so I'll just assume that this is the best of what speculative poetry had to offer.

When it comes to the fiction, it's a welcome reminder of 2007, or in some cases, 2006. Ted Chiang's "The Merchant and the Alchemist's Gate" and Karen Joy Fowler's "Always" are two stories that pop up in the first few pages and nothing feels more appropriate especially since these two stories also make an appearance in some "Best Of" anthologies and are easily the strongest narratives in the bunch. But let's say you've read all these award-winners and one thing familiar readers can look forward to are the end notes which reveal a facet about the story and the author's writing process.

Datlow's bias--and it's a bias that I enjoy--comes into play in her selection of the nominees featured (there's obviously not enough space for everyone). She does a great job in showcasing stories that are not only groundbreaking for one reason or another but their diversity as well. For example, Geoff Ryman's "Pol Pot's Beautiful Daughter (Fantasy)" combines elements of reality with the fantastic and produces a fiction piece that realism or fantasy individually couldn't accomplish. Jennifer Pelland's "Captive Girl" is less holistic in terms of writing style but it's nonetheless noteworthy thanks to the author's daring and focused thesis. The real treat for me was Lucius Shepard's novella "Stars Seen Through Stone" which kept my attention for an entire hour. Aside from the compelling prose, Shepard layers foundation upon foundation on his characters, subtlety seeds the story's premise, and even includes horror that feels Lovecraftian but isn't simply a derivative.

It was a real treat revisiting these stories and in some cases, discovering new ones (which was the case with Shepard's story). While the Nebula Awards Showcase 2009 is no replacement for the best of the year anthologies, it's an interesting distillation of what was lauded by the SFWA. I definitely enjoyed all the fiction and the poetry, and the nonfiction were insightful reads.
Posted by Charles at 4:36 AM