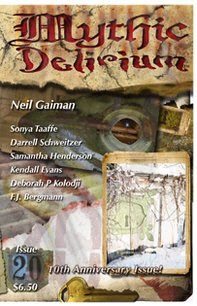 Mythic Delirium is a magazine of speculative poetry and from my understanding, issue #20 is an oversized issue to celebrate its 10th anniversary. As someone coming into this publication via a fiction background (as opposed to a poetry background), the poems are quite accessible as they reflect the editor's (Mike Allen) taste, which is to say that there's a narrative to the poems instead of simply being an exercise in verbosity and fanciful language. Not that Mythic Delirium is lacking those: Sonya Taafe's "Zeitgeber" is a poem that should be read out loud as the words roll of your tongue. This isn't apparent at first glance as Taafe uses simple words instead of esoteric ones but they're just as effective and betray her skill in alliteration.

Much promotion of this issue has been geared towards the first poem in the magazine, "Conjunctions" by Neil Gaiman. To a certain extent, I feel it's overhyped--and why it must be tackled in every review of this issue--but taken on its own, it's decent. Perhaps not the poem that stands out the most in this issue but it doesn't falter either (and arguably most, if not all, of the poems in this issue work, but that's an assessment of an unqualified poetry reviewer). Gaiman conjures vivid imagery and there's an interplay between the literal and the metaphors.

As for the rest of the poems, I enjoyed the overall flow of this magazine. When reading Mike Allen's poetry collection, The Journey to Kailash, there's a certain fatigue that sets in when you get to the nth poem. That's not the case with Mythic Delirium as you're ready to tackle the last piece as easily as the first. While there's a certain similarity to each of the poems (i.e. the aforementioned inclusion of an easily-identifiable narrative), they're diverse enough that they elicit a different form of satisfaction depending on the poet and the piece. "Beauty Sleep" by Erin Hoffman for example tangentially refers to a popular fairy tale and subverting its common interpretation, combining bluntness with beautiful images. Compare that to "Hellawes" by Georgette Perry which references a popular legend as well but in this case posits a what-if scenario and part of the poem's charm is the apt use of repetition. Another example is Darrel Schweitzer's "The Birthplace of Homer (circla 200 B.C.)" and "What If I Were Secretly the Phoenix?" The former reads like a philosophical musing on a claim and much more literal while the latter is more personal and works on multiple levels.

Another poem I feel must be tackled is "In the Astronaut Asylum" by Kendall Evans and Samantha Henderson, the longest piece in this magazine and strategically placed in the middle. There's a lot to be praised here, from sustaining the reader's attention for such a length, to maintaining consistency of scientific metaphors and description. The poem is divided into six parts, each section as bizarre and striking as the one preceding it, at the same time contributing to the larger whole.

Overall this was a quick and enjoyable read, anything but daunting and possesses wit and depth.
Posted by Charles at 4:32 AM