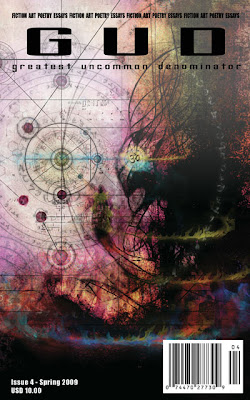 Greatest Uncommon Demoninator (GUD) Magazine #4 was a pleasant surprise. I've heard of the publication before but it's only now that I got to read the said magazine. This is easily one of the fertile fields as far as the semiprozine category is concerned. It's of particular interest to me because unlike some of the semiprozines I know of such as Clarkesworld or Lady Churchill's Rosebud Wristlet, neither the editors nor the contributors are familiar names. There's a certain joy in reading each story or poem or nonfiction (or viewing the artwork--in fact it's only at the credits that I realized the magazine had a Filipino contributor) without any preconceptions.

Because I'm a sequential reader, layout and chronology is important to me and Gud Magazine has a professional design. The typeface is consistent and all the necessary details (page number, story title, issue number) is available on each page without being intrusive. Subtler is the presentation of stories, poetry, and art. The short stories will obviously dominate the magazine as it represents a bulk of the material but the editors pay close attention to what precedes or comes after the lengthier pieces: artwork and poetry. This gives readers a reprieve that breaks the monotony.

There are four things I want to tackle but let's first talk about the art. The medium's black and white and each artwork takes up a page. Each piece is more like an editorial cartoon, a standalone text accompanied by a title and the artist's name. Not so thrilled with certain specific artworks but for the most part, they're distinct and cover a variety of styles. Jesse Lindsay's "The Strangers Are Tuning" is used for the cover but the black and white version has its own appeal. "Idolomantis Diabolica" by the same artist is equally impressive but perhaps that's my preference for that particular style. Another piece that caught my eye is "Bird Liquor and the Boastful Ghost" by Joseph Larkin.

The second subject I want to tackle is the poetry. Gud Magazine seems like a good venue as any to include speculative poetry and there's a couple of them in this issue. Honestly, there's not really a piece that's memorable for me but then again, I'm not really into poetry. The common pattern among the poems is that there's a narrative to them, with the occasional poet playing around with structure or repetition. They're all decent but again, nothing that really grabs me by the time I finished the magazine. Perhaps it was drowned out by the fiction.

Third is the nonfiction. There's honestly just one, "What Kafka Knew" by Christy Rodgers, and it's an interesting discourse on what makes Kafka's writing relevant as well as identifying some misconceptions about the author.

Last but not least is the fiction and this is easily the magazine's strongest asset (as it should be). There's a clear slant towards literary writing, whether it's the focus on characters or experimentation in structure and technique. I love this kind of bias and there's all sorts of treats that I discovered in the magazine. Another element that I noticed is that there's a diverse cultural zeitgeist from which the contributors draw from, instead of simply plundering Western tropes and themes. Gud Magazine also includes some reprints and excerpts but then again, they're not necessarily venues everyone's aware of, especially if you're a reader that doesn't venture far from the usual suspects of speculative fiction.

First off is "Q&A" by Nik Houser. Perhaps it's not the strongest piece in the magazine but it certainly was enjoyable, especially with Houser's simple but elegant language and his inclusion of the story's conceit, the personification of letters. The break in reality also makes for a great metaphor in addition to Houser's inclusion of a horror theme.

If you're looking for a story with gravity, then "Flip Lady (1986)" by Ladee Hubbard is a must-read. From the story's tone and setting, it's evident that this is a period piece. In that sense, my only complaint is that the author includes a year in the title, which is unnecessary in my opinion. But that complaint aside, Hubbard easily satiates the literary reader, especially with her focus on relevant issues, a strong grasp of character (the dialogue alone is well-crafted), and the way events are implied rather than dictated.

"How Ramona Saved the Ducks" by Allan Richard Shapiro is another of those literary reads. The strength of Shapiro here are his characters and there's quite a cast of minor characters here but every person comes to life with their own quirks and foibles. While this is just an excerpt from the author's novel, it clearly works as we immediately dive into the conflict and concludes with a touching resolution.

Overall this was a meaty issue with a diverse selection of fiction, art, and poetry. If you're looking for something beyond the norm but with a closer relation to literary writing (as opposed to genre writing), this is a good place to start.
Posted by Charles at 7:31 AM

Thanks a lot for the kind words about my work, glad you like it!