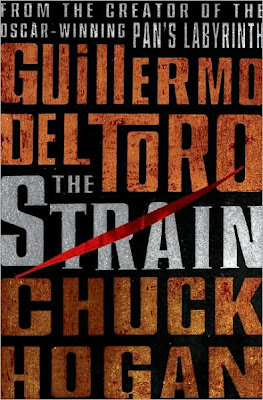 As a snobbish reader, I have this bias against people successful in other fields who try their hand at writing. Case in point: when I initially saw The Strain at the bookstore, I missed Chuck Hogan's name and thought it was solely a Guillermo Del Toro novel: probably not for me. But listening to Rick Kleffel's interview with del Toro made me reassess my opinion as the latter understands the strengths and limitations of prose.

I must admit, The Strain is very compelling. del Toro and Hogan know how to play up the suspense, making each moment of the book mysterious and new--a commendable feat considering the thousands of novels on vampires. While the new interpretation of vampires might interest science fiction fans--the authors create a believable physiology for the creatures--the real strength of the book is how the authors have a handle on the pacing. There's a lot of shifting point of views, not in the lengthy method George R. R. Martin does in his A Song of Ice and Fire novels, but snippets more akin to trailers: there's enough to tease and give us an appraisal of the situation, but they're short and direct.

Using short, alternating point of views can be tricky but the authors know how to utilize them to maximum effect and without the reader feeling cheated. On one hand, you have scenes where the POV character dies. On the other, you have these colorful characters that are fleshed out and, at the very least, interesting if not sympathetic. And that's really the heart of it. Sure, this is a popcorn novel that's action-packed and not as deep as a James Joyce book, but the characters are complex and very human. The protagonists come alive in the same way Ripley redeems the Alien movies. Add a dose of telling details and voila, you have a winning package.

The Strain is a satisfying read that can't be put down. Del Toro and Hogan are masters of suspense, prose or otherwise, that perpetually makes you wonder what happens next.
Posted by Charles at 6:42 AM