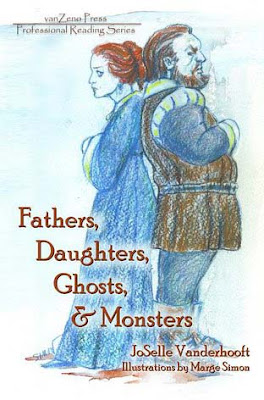 What's tricky with poetry collections is that there's a point when mental fatigue sets in and one needs to leave the poems for some time before revisiting them. That's not the case with Fathers, Daughters, Ghosts and Monsters as a whiff of the first poem was enough to enthrall me to finish the book in one sitting. How JoSelle Vanderhooft accomplishes this is through her prose-poem approach: the lines are direct rather than metaphorical (although the entire poem is layered) and there's a clear narrative structure. That's not to say Vanderhooft doesn't have other assets, such as her skill in creating descriptive images or wondrous scenes, and when she does use repetition, they are effective and poignant.

When we look at the collection as a whole, another commendable element is how Vanderhooft is faithful to the theme. Even without looking at the title, one gets a sense that this is a book on daughters, with fathers as the foil or the point of view of the reader. The poet manages to accomplish this repeatedly without sounding repetitive or dull. Another motif present in Vaderhooft's writing is how the natural world is often a significant element, giving the entire book a primal and earthly feel.

There's a lot of great poems in this book, each one bearing Vanderhooft's signature style, but here are some that caught my eye. The opening piece, "The Grocer's Daughter," appeals to me because amidst the fantasy and bluntness of Vanderhooft, the entire speculative piece can be read as a metaphor. Does it matter that the grocer's daughter is literally a vegetable that was grown from the ground? What's more relevant to me is the emotions of the grocer, how his daughter started out as just another product, but eventually transformed into something else. What's effective with the prose-poem approach is that there's a steady build-up in expectation and anxiety, and "The Grocer's Daughter" is no exception.

"The Monster's Daughter," on the other hand, is where Vanderhooft's skill at repetition comes into play as it's used to heighten the juxtaposition between the monster and daughter characters. There's a rhythm and beat to this poem, with gems of vivid imagery and a gut-punching ending.

The longest and most ambitious piece--and perhaps the poem that deviates the most--is "The Vampire's Daughter." There's a lot to be commended when it comes to the author. First is the form and Vanderhooft not only sustains the interview format but makes it compelling. When it comes to the the narrative element, the poet has a good handle on build-up and suspense, and there's not a point when you can tear yourself away from the text. And then there's the layered levels of the piece, at how Vanderhooft combines the vampires as a metaphor for stage actors, and how this combination of fantasy and literariness develop into a poem or story that's larger than the sum of its parts.

Not every poetry collection has a definite shape but Fathers, Daughters, Ghosts and Monsters is one of those books that has a clear identity. Vanderhooft has a signature style that's distinct and there's a lot of interesting poetry to be found here, even if you're not the type who typically reads poems.
Posted by Charles at 5:39 AM

I've podcast-interviewed JoSelle before and she is equally (frighteningly!) talented in a wide variety of creative fields. Thanks for the review, Charles. Shall keep my eyes open for this one.