"At Shared Worlds students create fantasy and science fiction worlds to fuel their writing, art, and game development. But even the strangest made-up place can have some real-world spark. Our own planet is often surreal, alien, and beautifully strange–and cities tend to focus our fascination with these qualities. Sometimes the exoticness comes from finding the unexpected where we live, and sometimes it comes from visiting a place that's foreign to us." - Jeff VanderMeer, Shared Worlds Assistant Director and Instructor

“What’s your pick for the top real-life fantasy or science fiction city?"

Want to join the discussion? Help one of the most unique teen "think tanks" in the country by posting the above link on your site or blog and asking your readers what cities they would choose. 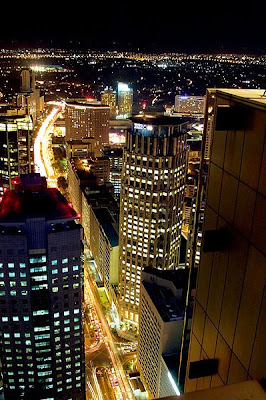 For me, it's got to be Metro Manila , which isn't exactly a city but a group of interconnected cities. Where do I start? If it's just demographics, we're quite diverse: aside from Filipinos, we have wealthy mestizos of Spanish-Filipino descent, Chinese businessmen and businesswomen, Americans who are either retired officers or are representatives of large corporations, a token presence of Japanese immigrants, Koreans who are learning English, Brazilians who model for ads and magazines, and a hodgepodge of other tourists from countries like Italy, France, and Saudi Arabia (yes, there are all stereotypes but that doesn't mean they're not true). With them they not only bring their own set of beliefs and superstition (one can make a living being a feng shui consultant for example) but is also a hotbed for conflict and agendas.

Our politics is just as exciting. More than two decades ago, we freed ourselves from a 20-year dictatorship in a successful employment of People Power--shades of today's Iran elections but the color was yellow instead of green (it had a sequel in EDSA II where people rallied via SMS instead of Twitter). Notable faces in politics include a cardinal with an interesting name: Cardinal Sin; former president Joseph Estrada, an action star who climbed the political hierarchy until he became president of the country only to be overthrown by the people but still won the hearts of the masses; one of the now-deceased leaders of the Moro Islamic Liberation Front (MILF) had the alias Commander Robot; and a recent stunt of senator Mar Roxas includes wearing a necklace of garlic to ward off aswang. And election time can get quite crazy, with a black-out lasting a few seconds which is enough time to switch ballot boxes with votes from the deceased.

The economic landscape is similarly fiction-worthy. The rich and the poor are juxtaposed as it's not uncommon to find a street where one side are huge houses with walls studded with broken glass, fences, or chicken wire to keep people out, while one the opposite side are squatters living in makeshift homes. Billboards are present in nearly every major highway to the point that they become hazards during a typhoon. Makati and Ortigas are these huge business districts where tall buildings are packed so close to each other and Starbucks or Mini-Stop (the equivalent of 7-11) is just a street away. Along with "regular jobs," we have call center agents who work the night shift as they cater to foreign clients and speak with artificial American and British accents. But despite all these technological advancements, in that same area we have merchants selling bootleg videos and software for a dollar, and cigarette sticks (not packs!) are being sold on the street. We have huge shopping malls that are open 11 hours every day and home to many rumors such as bomb threats, people infected by AIDS who plan to spread the disease by pricking random people with used needles, or a large serpent that eats lone visitors in dressing rooms and rest rooms.

Culturally, we still believe in a lot of superstition. The Chinese have their feng shui which involves rearranging the home or office layout every year, while news of faith healers--both Catholic or otherwise--occasionally make the headlines. So despite the Cyberpunk atmosphere of the Philippines, we still have this rich sense of the fantastical underneath it all.

Shared Worlds is also proud to announce Tor Books, Wizards of the Coast LCC, and Realms of Fantasy magazine as major sponsors. Thanks to them for their enthusiasm and support.

Now in its second year, Shared Worlds is a two-week unique summer camp for teens ages 13 to 18, held at Wofford College in Spartanburg, South Carolina. This year the camp runs from July 19 to August 2, with registration still open to the end of June. Creative and fun, Shared Worlds emphasizes writing fiction, game development, and creating art—all in a safe and structured environment with award-winning faculty. Participants in this “teen think tank” meet like-minded students and learn how to work together and be proactive on their own. The first week, the students form teams and create their own worlds; the second week, they create in them. Faculty for 2009 will include Holly Black, co-creator of the Spiderwick Chronicles, Hugo Nominee Tobias Buckell, White Wolf game developer Will Hindmarch, World Fantasy Award winner Jeff VanderMeer, Weird Tales fiction editor Ann VanderMeer, and more.

http://www.youtube.com/watch?v=PVx2pr_Th8Q&feature=player_embedded
Posted by Charles at 7:27 AM