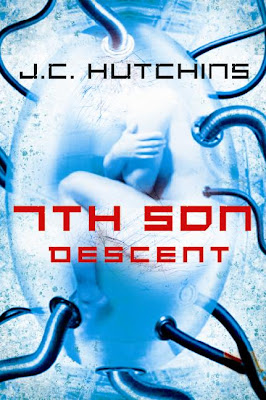 I'm one of the people who've bought into the hype of podcast authors (who've been published in print) like Mur Lafferty, Scott Siggler, Matt Wallace, and yes, J.C. Hutchins. I've heard of his name, and parts of his plot in various interviews, even before I got to actually read his book. And because of that, I'm wary: is Hutchins' writing as good as his marketing? Thankfully, in the first few pages, it's clear to readers that Hutchins can write. A criticism that might be levied upon podcast authors is that they self-publish, but in this case, the author backs it up with actual skill. I can see why St. Martin's Press picked up this novel as it feels right at home with what's being released by traditional publishers.

7th Son: Descent is best described as a thriller infused with science fiction elements. When it comes to the former, it's formula in the sense that it contains techniques and beats that are the lifeblood of authors like Brad Meltzer: it starts out with a strong beginning, features a conspiracy of some sort, and constantly baits you with cliffhangers and mysteries. Hutchins isn't original in that sense, but one must admit, he can write a compelling thriller, and is sure to please anyone who loves that genre.

The other aspect I'd like to highlight is the science fiction. At first, the premise of clones isn't unique. In fact, cloning to a certain extent has stopped being science fiction. The "secret sauce" present in the story, so to speak, deals with memory and psychology. With the first, how can clones--identical as they are--have the same childhood memories? This science is not hand-waved but tackled extensively in the book; perhaps not as in-depth by hard science fiction standards but it is given some thought. The second aspect, psychology, is probably what'll catch science fiction readers' attention. As can be surmised from the title, there are seven clones in the story. Each one has identical genes but they look and act different. On one end, you have a fit man who entered the military. On the other, you have this anti-social hacker who's overweight and plagued with voices in his head. It's the nature vs. nurture argument exaggerated in a way only science fiction can. Admittedly, there is some oversimplification here, as the clones are more like aspects of the main test subject, with certain personality traits becoming more dominant.

The real struggle for Hutchins as a writer is the fact that his narrative has seven protagonists. Not a lot of authors can work well with that many characters. And in fact, the lowest point in the book is probably the beginning, as seven random kidnappings culminate to the revelation of the top-secret project. I'll be honest: I'm not good with names and with all the generic names of the clones, I didn't really track all of them. Instead, I relied on Hutchin's conceit, which is describing the characters by their profession: soldier, priest, geneticist, etc. It might be an inelegant technique but it works.

The other problem is that as much as Hutchins tries to share the limelight on all the clones, one can only do so much with the limited page count. Some of the characters do get the shaft in terms of characterization, but that's not so bad when you look at it from the perspective of a series (well, Hutchins better be planning to write a sequel!). It also falls prey to the first-book-in-a-series syndrome in the sense that most of the novel is spent setting up the dilemma and providing exposition. 7th Son: Descent answers all of your questions before diving right into the action, and that takes some time. Hopefully it'll be non-stop action in the succeeding novels, but as for this book, it ensnares you not because of the actual developments, but because it's preparing you for the coup de grace.

7th Son: Descent is fun and engaging for what it is. There's material here to satiate both thriller and science fiction readers, and Hutchins has a firm grounding in both.
Posted by Charles at 7:07 AM