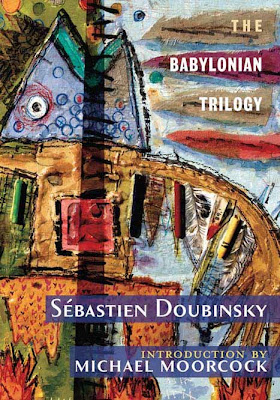 Sebastien Doubinsky is the author of The Babylonian Trilogy. His upcoming books from PS Publishing include Absinth and The Potemkin Overture.

Thanks for agreeing to do the interview. First off, can you tell us something about yourself? Can I ask what's your day job?

I teach French and French literature at the university of Århus, in Denmark. And I love my job – I have great students, super colleagues and the luck of having one of the best contemporary Indian writers, Tabish Khair, as friend and colleague in the English department. Coffee breaks are great and quite literary!

As for more personal matters, I am French, 45 years old, married to my wonderfully patient wife, Sofie, and have two children, Theodore and Selma. Before moving back to Denmark last year, we lived for 8 years in Paris.

How did you come up with the concept for The Babylonian trilogy? What was your goal in writing it?

The concept actually took a while to appear. I wrote The Gardens of Babylon (the last part of the Trilogy) first, in the late 80s, and at the time I wanted to re-create some of the ambient bad (and stimulating) craziness that seemed to pervade these years.

I started on The Birth of Television according to Buddha (the first part) during the first Iraqi war, wanting to metaphorize the seemingly never ending Western/Capitalistic conflicts that plague our history and how they seem to shape our society’ subconscious –like Vietnam, for instance, or the Colonial wars. As I was ploughing through it, I suddenly realized how much this book was linked with The Gardens of Babylon and began toying with the idea of somehow linking them together.

The connection was made through Yellow Bull (the middle part), which was written in disgusted reaction with the “Psycho-killer” fascination of the mid-nineties – suddenly, its very different format (a detective novel, sort of) seemed like the perfect transition.

How did PS Publishing end up publishing your book?

"End up”, that is an excellent definition! Ha, ha! They did hesitate for a short while…

But, seriously, it was, on their part, quite a courageous decision. I had the luck of meeting Michael Moorcock in Paris, through a common friend, old Mighty Baby guitarist Martin Stone, and we became friends. After many conversations, right before leaving back for Texas, he asked me to read something of mine and I gave him (trembling) the Babylonian Trilogy manuscript. Fortunately for me, he loved it and recommended it to PS Publishing.

Peter Crowther liked it too, and ended up publishing it, after some reflection, as the style was… hmmm, different from what he usually publishes. And to my great pleasure, Michael Moorcock accepted to write the introduction.

What I liked about The Babylonian Trilogy is that you have a distinct voice and style. How did you develop it?

That is a very, very difficult question to answer.

I would say that I have always loved fragmentary writing, such as Joyce, Burroughs and Moorcock’s Jerry Cornelius series, for instance, and border-pushing music – like Sonic Youth in the 80-90s and today Matt Gangi or Gesus Crystler. I do not like comfort for writers and therefore I try to go as far as I can without scaring away the reader, whom I (strangely) always respect – but I am a reader too, after all.

But I do write to put myself in danger and to express myself as freely as I can. I feel that if there is no danger, then there is no reason to write. No worth. No meaning.

Any difficulties in writing the novel?

A lot, of course! But, apart from writer’s block (which always happens after a very satisfying period of “good work”), I can’t remember precisely what!

What made you decide to pursue writing?

When I was twenty years old, I decided to try and write as honestly as I could and never regret one published line. Ten novels later - so far, so good.

In many ways, I am – like Burroughs, Ballard or Moorcock – a very political writer and I feel that the things that made me angry in my youth are still here or have worsened. So to keep writing seems to me very essential. And for my readers too, I hope.

Do you now consider yourself an author?

Yes, definitely. I have published ten novels in France. It’s about time, no?

Could you tell us something more about them?

In French, like I said, I love to explore and subvert genres.

Two of my novels are pseudo-historical novels (Les vies Parallèles de Nicolaï Bakhmaltov, which takes place between the two world wars, starting with the Russian revolution, and Fragments d'une révolution, in which I have transposed pre-1911 Mexican revolution events to the late sixties, with a touch of magic-realism)

La comédie urbaine is a trilogy about three slackers in today's France, trying to fulfill their dreams.

Le livre muet and Les Fantômes du soir are both magic-realist novels dealing with the issue of creation, identity and, of course, death...

To be complete, I also have published three collections of poems and a fourth is coming out this spring...

Like I mentioned before, Burroughs and Moorcock are among my favourite. I could definitely say The Place of Dead Roads and Nova Express for Burroughs and Mother London and The Cornelius Quartet for Moorcock.

How did you first hear of PS Publishing? Why did you think your novel as a fit for them?

Actually (and I hope Pete won’t be mad at me for that!) I first heard of PS Publishing when Michael Moorcock told me about them… But I immediately looked them up on the Net and thought I might indeed have my chance there – it was so wonderfully various and strange! And with writers with great personalities, from Ramsey Campbell to the great, less-known but wonderfully bizarre and poetic David Herter, whom I strongly recommend!

Do you intend to be a genre author or more of a literary writer (or something else entirely)? How would you describe your writing?

I am, actually, a “genre” author, in the sense that I love genre because it enables you to destroy it! In French, I did explore various genres, from crime fiction to classical narratives and in English, I would coin my work as “Hard-fiction”, as it borders on “speculative” fiction and “new weird”, without really belonging to any of them. I would tag under “hard-fiction” all borderline books, from Durrell’s Tunc and Nunquam, to Zamyatin and Kafka…

What's your opinion when it comes to the speculative fiction field?

It’s a hard question to answer because I think it’s an enormous field, with a lot of good things and a ton of crap… I like speculative fiction when it attacks pre-conceived ideas on all sides –and I hate it when it becomes preaching material. For instance, I love Orwell’s 1984 and Huxley’s Brave New World, but find Houellebecq’s Possibility of an island quite insipid…

Watch out! If you enjoyed The Babylonian Trilogy, I have a couple more weird novels up my sleeve…
Posted by Charles at 3:15 AM