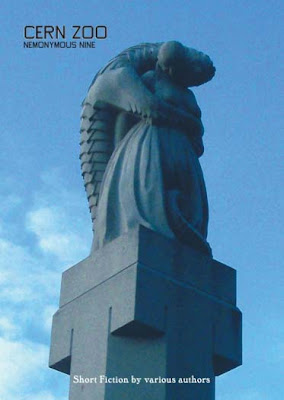 Cern Zoo is the ninth Nemonymous anthology which features anonymous authors working on a common theme--in this case Cern Zoo. One of the joys of reading such stories is how writers creatively utilize the given concept in their narratives. This anthology has a whopping two dozen stories, which brings me to the love-it-or-hate-it aspect of the book: it a couple of flash fiction pieces. Now I'm not a big fan of flash fiction, as there's not enough meat in the stories to really satiate me. Cern Zoo includes all sorts of flash fiction. Some are admittedly gimmicky and unsatisfying, but there are well-crafted ones which feel complete despite the length.

There's a diverse set of stories featured in the Cern Zoo, ranging from humor to science fiction to fantasy. What I want to focus on are the horror pieces, not just because they're one of the lengthier stories, but because they're done effectively. "Artist Eterne" for example is a steady and well-crafted story with a gothic atmosphere and features one of the more original concepts stemming from the words Cern Zoo. It's rich in character and the author captures the mood he's trying to emulate, giving us a chill by the time we read the last paragraph.

Another noteworthy piece is "The Lion's Den". If it's just length that you're looking for, this story more than fits the bill but the author makes it compelling all throughout. Much like "Artist Eterne", there's a gothic feel to this story although it's clearly building up to an ever-escalating horror. While this is one of the more straight-forward zoos in the anthology, what I appreciate is the sheer technical skill of the story: the way the author hooks you with a foreshadowing, the ever-pervading mystery that doesn't truly get resolved, and the consistent tone.

While the other stories in the book aren't as spectacular as I want them to be (I found last year's anthology to be a stronger set), they are admittedly compelling and those that aren't are short enough. In a certain way, the sheer number of stories, formats, and genres does emulate a form of literary zoo that's apropos for the title. Cern Zoo is quite a unique anthology and worth an initial read at the very least.
Posted by Charles at 7:12 AM

The stories for this anthology were written specifically for the concept "Cern Zoo"; however, it is also the perfect anthology title for this unique collection of varied voices and ideas on a theme. Interpretation is everything.