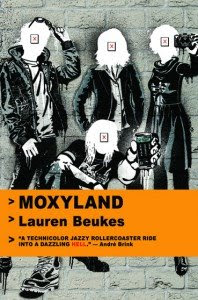 Right from the get-go, Moxyland reads like a post-cyberpunk novel that's updated for modern times. You still have the greedy mega-corporations, the hackers, and the street slang but instead of outdated technology, Lauren Beukes fills the details with both familiar and not-so-familiar ubiquity. The strength of Beukes is that she writes with such passion and sensibility, a style completely her own, that the novel comes out as fresh and dynamic. She packs all the attitude and confidence, giving Moxyland a distinct character.

Not that this novel is perfect, mind you. While the author uses multiple characters, they all sound the same, making their individuality not as striking. There's also an attempt to add cultural diversity and while Beukes includes a few details here and there, they fail to sound authentic as every character seems to be consumed by the dystopic setting. Having said that, what you end up with is a very focused novel, and to Beuke's credit, the atmosphere and setting is consistent. She captures this sense of intrigue and paranoia, and writing flaws be damned, concentrates on what she does best.

I'm honestly not a fan of cyberpunk but Moxyland seems to be a perfect fit for fans of that subgenre. Beukes reminds me of an early William Gibson while still retaining her own unique voice. The book isn't perfect but it caters to a specific audience and I can easily imagine some readers clinging to the book solely on the strength of Beukes' writing style.
Posted by Charles at 5:18 AM