Book/Magazine Review: Mark of the Demon by Diana Rowland 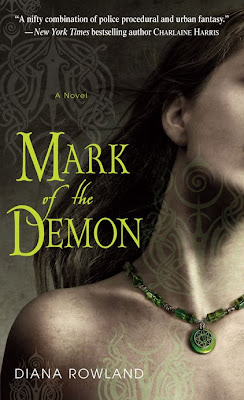 Upon reading the first few pages of Mark of the Demon, it's evident that this book falls under the paranormal romance and urban fantasy sub-genre. Diana Rowland includes tropes such as love triangles, seduction by some supernatural entity, mystery and magic. While that may all sound formulaic, Rowland does create a compelling novel and infuses it with her own unique elements. For example, there's a heavy focus on forensic science in the book. Perhaps not quite the novelization of a C.S.I. episode, but there's enough details that give it an air of authenticity at the same time dispelling stereotypes of such a field.

What's impressive with Mark of the Demon is how Rowland dives immediately into the action but still giving readers enough information. The opening chapter, for example, starts with a summoning ritual gone wrong and it's in this sudden conflict that we get to know our heroine and the kind of world she lives in. The novel is also quite compressed which becomes important when the main character talks to her contacts: instead of boring us with repetitive scenes, Rowland simply focuses on one vivid encounter, showcasing her talent in characterization and dialogue, and it's enough to convince readers that the author has a firm handle on the setting without distracting us with preciosity.

There's also an inherent wit in Mark of the Demon that makes reading such a book refreshing. Another quality that caught my eye is that this is a geek book in the sense that a couple of Rowland's characters are geeks and this comes out in the writing. While the reading experience was compelling, perhaps one complaint is how the mystery of the book is handled. While it's not quite the Scooby Doo method of resolving a crime, the identity of the murderer comes a bit of a surprise.

Having said that, this is really a fun and exciting novel. It's obviously not aiming to be a literary masterpiece but more than meets the criteria of a guilty pleasure.
Posted by Charles at 7:13 AM