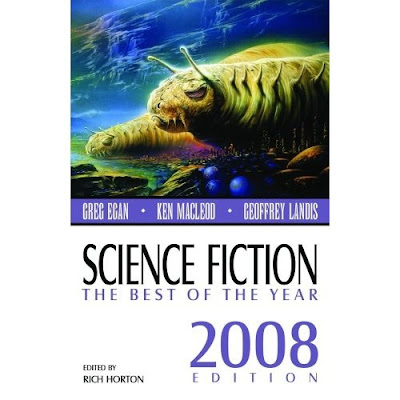 I'm a big fan of anthologies and when it comes to the "best of the year" ones, there's really not a lot to choose from: in science fiction, you're down to Gardner Dozois, Jonathan Strahan, and David G. Hartwell/Kathryn Cramer. And then there's Rich Horton. I hold Horton in high esteem, not because he's the "best" editor out there, but because I'm fortunate that his tastes align with mine. That's not to say that the stories he deems best is also my best, but rather when he assembles an anthology such as Science Fiction: The Best of the Year 2008 Edition, I'll be enjoying 90% of them without fail. And that's honestly the secret to enjoying such anthologies. It's not about finding a definitive list of "best" short stories, but finding an editor whose preferences are similar with yours.

As much as I enjoy the very lengthy introductions of the Year's Best books published by St. Martin's Press, there's a charm to Horton's shorter versions. In just five pages, he tackles the relationship of the Pulitzer's and genre, the best SF novels of 2007, what stories didn't quite make it into the book, and an overview of the genre magazines and anthologies. Like this review, there's a place for brevity.

Now let me tackle the actual stories. Here's an admission on my part: I'm not that well-read when it comes to science fiction so a lot of the stories featured here were new encounters for me. That said, my 90% Rich Horton rule--personal biases included--applies. Heck, the first story, "Dark Integers" by Greg Egan, immediately grabbed my attention. What's stunning with Egan's writing is that it satisfies both the hard SF crowd (whose preferences can get bogged down by exposition and plot) as well as the literary crowd (who favors characterization and language). On one hand, he uses elements which are clearly science fiction, from mathematics to parallel universes, and anchors readers by making his main character appear human--he's not a super agent ala James Bond and saving the world interferes with the protagonist's relationship with his wife. Some writers focus on one and neglect the other but Egan juggles both with great skill. In fact, even when soap opera elements are at play such as the crashing of planes and the destruction of civilization as we know it, Egan's spotlight is always on his characters. "Dark Integers" is a lengthy piece to open an anthology with but the ending is worth it and there's no regret when it comes to the investment of the reader's time.

Another story I'd like to highlight, especially in contrast with Egan's lengthy piece, is "For Solo Cello, Op. 12" by Mary Robinette Kowal. It's a quick read and the mention of the science fiction element is just brief but this is also one of my favorite stories in the book. Kowal's focus are the characters and most of the text is spent exploring their motivations and their dilemma. What's particularly adept here is that while the protagonist's wife only gets two scenes, readers feel like they understand her even when the spotlight is on the husband. There's a lot of understated conflict even as Kowal includes only the essential details. And just when you think you've understood it all, the author manages to sneak in another layer when it comes to the ending.

There's a couple of other enjoyable pieces such as "An Eye for an Eye" by Charles Coleman Finlay, "Wikiworld" by Paul Di Filippo, and "Art of War" by Nancy Kress but I want to focus on "Perfect Violet" by Will McIntosh. It's honestly not a perfect story. His description for example is lacking, especially when it comes to the main character's lover: "He was a black man, tall and lanky." It's really no surprise when "...the customer, a tall black man..." turns out to be the same person. But those who would criticize McIntosh of that particular aspect misses the point. McIntosh's style isn't focused on description but rather on plot and character. The charm of this story is how the author takes one concept--the ability to download memories--and pushes the limits of this hypothesis. There's a series of ricocheting dilemmas here and there's a part where I can sense an aspect of "The Gift of the Magi" by O. Henry but McIntosh seeds this story with several layers that makes it go beyond that particular classic. If Egan is a writer whose fiction excels on all levels, McIntosh, at least based on this story, is this concentrate that leaves a distinct aftertaste.

Horton in my opinion provides a terrific selection when it comes to 2007's best science fiction short stories but another reason why one should read this book is that there's little overlap between Horton's choices and that of other editors. If you want a good overview of the field, this is a good place to start.
Posted by Charles at 5:52 AM