Book/Magazine Review: Baltimore, or, The Steadfast Tin Soldier and the Vampire by Mike Mignola and Christopher Golden 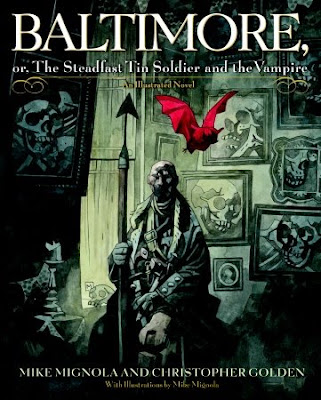 Sometimes, the sad fate of illustrated novels is that they are repackaged into a paperback, discarding most if not all of the illustrations and sacrificing a good chunk of the form. In such a scenario, Baltimore will still be a wonderful read. However, the reader will never witness Mike Mignola's artwork gracing the pages, showing snippets and facets of the story instead of a single, huge illustration that is the norm for such books. And then what will happen to the chapter openings, a pair of tin soldiers flanking the title and sub-title, along with an apt quote from Hans Christian Anderson? Again, Mignola's art is by no means essential, but his unique sensibilities and style contributes to the gothic atmosphere the book evokes and this is, simply put, a gorgeously illustrated dead-tree product.

When it comes to the fiction, one would expect from the title that this is a vampire-hunting slugfest but both authors surprise us as they give us something else. Baltimore reads more like a menagerie of horrors, almost like an anthology, but one that is grounded by a common theme and focus. Mignola and Golden write a very character-centric novel, fleshing out motivations and tragedies. Piece by piece, it builds on the reader's sympathies until one is swayed, and the book can't be put down even if your eyes were sleepy an hour ago. This is partly due to the way the authors play with reader expectation as while some of the stories might seem familiar, the authors subvert them into a refreshing tale that both surprises and leaves an imprint.

The language has a functional tone to it, always in the service of the story rather than making any attempt at drawing the reader away from the text. Another element to be praised is how the parallelism of our protagonist and The Tin Soldier is maintained. Last but not least is the novel's culmination and while Mignola or Golden could have taken the easy route and provided us with a cliche ending, they instead take the more difficult road which feels apt and inevitable.

This was an enjoyable and dark read. I love it how Baltimore defies expectations rather than relying on staples that we're familiar with. There's a synergy when it comes to the layout and the text making this an effective illustrated novel.
Posted by Charles at 7:13 AM