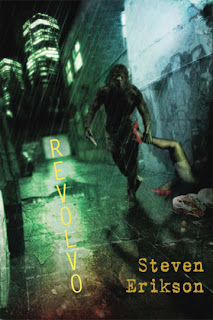 Revolvo is this quick-paced novella by author Steven Erikson that both satirizes and provides an interesting read. The book follows a three-act structure and features a disparate set of characters.

One of the strengths of Revolvo is how easy it is to get into. It helps that they're written in short burst of chapters. The characters are truly characters as they find themselves in seemingly ludicrous situations and react in the strangest ways. Part of the satire is the environment they're placed in which is this bizarre mix of politics and art although they could very much exist in the real world.

Events come to a close as the various elements that Erikson sets up convenes by the time we reach the third act. Expected mayhem ensues and the author manages to resolve them competently. Revolvo's a decent read and has a few good moments as well as some confusing ones. It all boils down to the characters and I personally found myself enjoying some characters but not so much the others (or rather having difficulty keeping track of all of them). Still, due to the length and the writing style, that's not too big of a dilemma as you'll find yourself getting into the action sooner rather than later. Overall it's not bad and has a definite, unique atmosphere.
Posted by Charles at 5:58 AM