Book Review: Pump Six and Other Stories by Paolo Bacigalupi 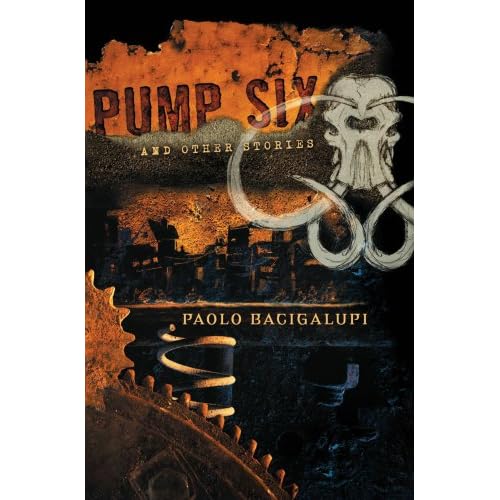 I was eagerly awaiting for my copy of Pump Six and Other Stories to arrive and when it did, well, it didn't disappoint. There are ten stories (eleven in the limited edition) in this collection and while the book isn't particularly long (under 250 pages), the quality more than makes up for the quantity. Bacigalupi takes aspects of the modern world and exaggerates them to the point that they form a dystopian science fiction setting. However, more than his modern-day relevance or his genre leanings, the strength of Bacigalupi is clearly his characters, whether they're nigh-indestructible humans who've forgotten what it's like to be vulnerable or cultural minorities simply making their way into the world. The author's writing style also goes beyond functional and injects new-fangled terms to the point that it reminds me of Cyberpunk--yet this one is more palatable.

"The Fluted Girl" is easily the most memorable story in the collection, mostly due to its ambiguous ending that Bacigalupi executes perfectly. Throughout the entire story, it had its appropriate beats which packed emotion and suspense at key moments. "The Pasho" was another story that impressed me and again, Bacigalupi triumphs thanks to his ending but unlike "The Fluted Girl", there's no ambiguity here. Instead, the story relies on the development of its two central characters. "Yellow Card Man" is another compelling story and as someone who understands a bit of the Chinese language, I'm amazed at how Bacigalupi manages to utilize the nuances of the language without citing Chinese words per se. Aside from that fact, it's a well-developed story that includes metaphors that work on multiple levels.

There's a lot of great stories in Pump Six and Other Stories and only a few that are just good. One gets a sense that many of these stories are set in the same dystopian future yet the execution is varied. Bacigalupi's stories pack a whallop while remaining compelling and accessible.