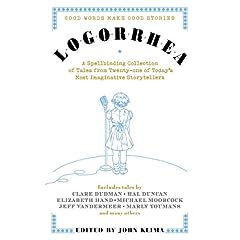 John Klima is the editor of Electric Velocipede and Spilt Milk Press. In addition to publishing the chapbook Psychological Methods To Sell Should Be Destroyed: Stories later this year, he also edited the anthology Logorrhea: Good Words Make Good Stories.

Hi! Thanks for doing this interview. First thing's first, can you tell us how you first got involved in the SF&F industry (both as a fan and as a business)?

As a fan, I’ve always read predominantly science fiction. My older brother also read science fiction and I would steal his books and read them. He belonged to the Science Fiction Book Club, which I thought was just amazing. I never thought at the time that I’d meet both the people who wrote the novels I was reading and those who put them together.

As a business, I was taking a class in college at the University of Wisconsin-Madison where we were reading Tolkein, CS Lewis, and Charles Williams. One day the professor read an announcement of someone looking for interns that had interest in working in science fiction, fantasy, and horror publishing. The internship was with James Frenkel (long-time Tor editor) who had just moved to Madison, WI with his family. This was in 1993.

Can you tell us about some of the projects you're currently working on? What can readers look forward to in the upcoming issue of Electric Velocipede?

I started publishing chapbooks (slim, single-author collections) a few years ago. This year I’ve got two slated to come out. One from Robert Freeman Wexler and the other from Lavie Tidher, both of whom I’ve published in Electric Velocipede. For Electric Velocipede, I’ve got stories coming out from Sandra McDonald, Leslie What, Patrick O’Leary, Patricia Russo, Terry Bramlett, and many more.

What in your opinion is one of the strengths of Electric Velocipede that sets it apart from other publications in the field?

I think I fit somewhere in between the traditional science fiction magazines and the off-the-wall lit zines. You might see a story about robots or space ships next to a story about a man dissecting a beetle written as a performance piece. I also think my consistency (two issue every year) helps a lot. People know the zine is coming out regularly and that if they liked a previous issue, they’ll like the next one, too.

You already touched on this in your excellent Zine Series but can you elaborate on what made you decide to start Electric Velocipede? What were some of the biggest challenges you ran into?

I wanted to publish a magazine in 1994 after I finished college, but couldn’t get organized. It was Gavin Grant and a panel at a Readercon that gave me the inspiration to finally make a zine. I knew what I was getting into in a lot of ways, but the time and money commitment for this are huge. I don’t think anyone can safely estimate that before they start. If you don’t have disposable income (or you need to be willing to start very small) and a lot of time, you’ll get frustrated very quickly.

When did you know that you wanted to be a publisher? An editor? Given unlimited resources, would you rather focus on just one or continue to nurture both aspects of your persona? (Is there a difference?)

After I was working with James Frenkel for a few weeks, I knew I wanted to be an editor. After I went to my first World Fantasy convention in New Orleans in 1994 and met a bunch of young publishers, I knew that I wanted to do that, too. Given unlimited resources at my control? I’d have to be a publisher. With unlimited resources I wouldn’t have time for editing. Hopefully I’d be able to find time for a book or two here or there.

Do you have a particular editorial slant in looking for material to include in the magazine?

Not really. I publish the best submissions I get. I’ve never wanted to give a theme to the zine or an issue, even.

Do you foresee transforming Electric Velocipede into a bigger publication in the future or are you content with its current form?

It’s gotten as big as I can make it on my own. I’d like to see it get bigger, but I can’t do it without help. I’ve been recruiting some people to help out, so hopefully by taking some of the workload off me, the zine can get bigger. I also have a full-time and a part-time job as a librarian, which is still my main profession. I don’t have a lot of free time, which is why I’m answering this at 2 in the morning.

I loved your anthology Logorrhea. Who came up with the idea and how did the anthology come about? Was it something you pitched to Bantam or something they hired you to do?

The idea was all mine. I had been watching the Scripps Spelling Bee for a few years to see what the winning word was. One year it was ‘autocthonous’ and I was disappointed with the sample sentence they provided for the speller. So I challenged writers to take one of the words and write a story based on it for Electric Velocipede. I got some good stories, and published two (the Hal Duncan and Neil Williamson pieces). But, I always felt something more could be done with it, so I went around and asked other authors if they’d be interested in writing a story should I sell the anthology. I had a good list of people who were interested in the project. I was in New York City for a reading and found myself sitting next to Bantam Spectra editor Juliet Ulman at dinner afterwards. I started telling her about my idea and she stopped me mid-sentence. She said, “Send me a proposal tomorrow.” In a month or so, I had an offer from Bantam. It was very quick, which is unusual.

What was the process like in doing Logorrhea? What was your criteria in choosing the authors and/or the stories, aside from the theme?

For me, having worked in publishing, the process was very second nature. In some ways, it was the type of thing I had literally done hundreds of times before. We worked very quickly so that the book could be in stores when the Scripps Spelling Bee was taking place. We tried to bring some mainstream non-genre authors, but our shortened time frame meant that a lot of people couldn’t be a part of it.

Who are some of your favorite authors?

What do you look for in a story? Any advice you can give to aspiring writers?

I like stories with layers; characters with mysteries; places with mysteries. When you first meet someone, there is a whole lifetime of information you don’t know about that person. Characters in stories are no different. Everyone’s life is interesting, it’s all in the way you tell it.

If you want to be a writer, write every day. Treat it like a job. Treat it like a business. It’s a tough thing to balance, the creativity of writing with the business of publishing, but if you plan on sending your work out to other people, you need to do it. But write every day. Get it so that writing is like showering or eating, that your day doesn’t feel right without it. That’s how I feel about editing/publishing.

Any advice you can give to aspiring publishers? Editors?

Do your research. Understand what you’re getting into. This is a slow build business. You need to develop a five year plan and not expect to be making money or even breaking even until then. With every issue I get quotes from printers to see if I can get a better price. You can’t be content to start something one way and never change it.

Will be seeing anything along the lines of Logorrhea in the near future from you whether it be a themed or unthemed anthology?

I hope so. There’s nothing definite at this time.

Because I'm a gamer and I saw your Gary Gygax tribute post, what was your favorite AD&D module? What made it your favorite? At any time, did you consider the possibility of being a professional game designer/writer?

S1 The Tomb of Horrors. It was the one time my brother and I played where he was the Dungeon Master. It was just so fun to play the characters for once. Plus, the whole module was like a big mystery to be solved. We played it in one sitting. It was great.

Since I grew up in WI, I applied to TSR several different times to work there, and I knew several people who worked for the company. I was never quite the right match, I guess.

My next chapbook from Robert Freeman Wexler – Psychological Methods to Sell Must Be Destroyed will be available in late April.

Can you tell us a bit about the Robert Wexler chapbook?

Here’s the URL [http://www.electricvelocipede.com/htm/wexlerchapbook.htm] the cover is by Tim Robinson, the introduction by Zoran Živković. It features six stories, five previously published and one new to the collection. The table of contents is:
Robert’s style if similar to Lucius Shephard, Angela Carter, Ray Bradbury… The stories build slowly and are filled with beautiful, wild, and wonderful worlds.
Posted by Charles at 6:41 AM