A Dance With Dragons Day One 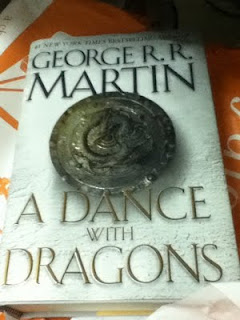 A Dance With Dragons is large and heavy, and I'm referring to its physical size and weight. The closest thing I can compare it to is my hardcover of Jonathan Strange and Mr. Norrell. At one point, I was carrying three copies of these in my bag and it was straining my shoulder.

So I spent much of today, aside from getting work done, visiting various bookstores, checking up on how they fare on the launch of a not-quite-popular novel (here in the Philippines).

Fully Booked, at least the branch in Promenade, didn't have copies. I had a reservation and nada, no phone call or text message.

Powerbooks, on the other hand, was pretty much on the ball, minus some arguable failings. They had copies in their branches by the time the stores opened. Where it failed was the pricing. It originally had a price of P1399.00 (and I bought one of my copies at this price) but was later adjusted to P1195.00 (matching the price at National Bookstore). By my estimate, each branch (save perhaps for its main branch) had around five copies allocated. The branches at Mega Mall and Shangri-La already had all their copies reserved so it was pretty much sold out when it was released (and informs you the kind of consumer market they have).

National Bookstore, on the other hand, got their books later in the day (sometime around lunch time) depending on the location. Again, by my estimate, they probably had five or six allotment per branch, unless a lot more were hidden (at least two were always on display). Unlike Powerbooks, most of their copies weren't reserved, so there was a lot to go around. Of course the problem is the slightly-delayed release and I think I saw a girl browsing through A Feast for Crows as she waited for a saleslady to assist her with a copy of the book as she dropped by when the mall just opened. (Anyway, if you still don't have a copy, National Bookstore looks like your best bet.)
Posted by Charles at 10:34 PM