Book Review: Mechanique: A Tale of the Circus Tresaulti by Genevieve Valentine 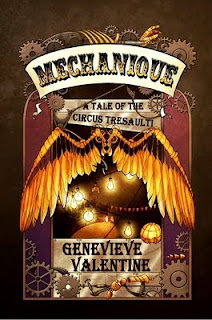 It's difficult to talk about Mechanique: A Tale of the Circus Tresaulti because it encompasses so much in such a short length. Occasionally, you come across a novel that breaks convention and more often than not, it's the structure that people end up talking about rather than the story itself. Not so with Mechanique as the form serves the narrative without drawing attention to itself. And in many ways, that's the secret of this book: Genevieve's Valentine's prose is elegant without crossing the line of preciosity. This is fiction stripped down to its bare essentials yet is full of potency and nuances.

If you've attended a writing class or workshop, your teacher, moderator, or classmates will have their own set of best practices when it comes to writing. What's impressive with Valentine is that she breaks many of those assumed rules and makes it work. For example, the heart of Mechanique are its characters, whether it's the individuals or the circus as a whole. It's a huge cast and one could easily assume that you'd need hundreds of pages to flesh all of them, just as authors like George R. R. Martin or Robert Jordan have done in their respective novels. Yet with Valentine, she conveys--and insinuates--a lot with just a few sentence or paragraphs. What's even more impressive is that despite the brevity, verisimilitude is never sacrificed, nor is their ability to defy expectation (and still act in character). Related to this is the "show don't tell" adage and Valentine does a lot of telling but it's enjoyable, appropriate, and the reader never feels being spoon-fed.

Another technique which Valentine successfully pulls off is the shift between first person and second person narratives. It's the latter that lesser writers stumble upon but Valentine's sparing but unhesitating use of it gives Mechanique that extra level of intimacy.

Other methodology which Valentine employs that should be praised include: flashback, foreboding, telling details, the alternating chronology, and shifting character perspectives. At first glance, the imagery and plot seems like a jigsaw puzzle: the reader might catch a snippet of the bigger picture or snatch a piece here and there, but what keeps you going is your piqued curiosity despite traversing the unknown. The individual chapters themselves, while not making sense initially, are interesting vignettes yet Valentine never dawdles as she quickly moves on to the next story, the next character, the next event. Soon, the complacent train ride transforms into an out-of-control locomotive and by that time, it's too late to pull back from the immersion.

Valentine weaves the illusion that writing and plotting is easy when Mechanique is anything but that. And that's the beauty of the novel, that it's quick and accessible yet daring and hides many surprises.
Posted by Charles at 8:01 PM