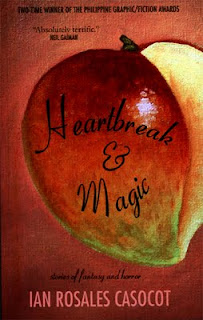 Ian Rosales Casocot's fiction--speculative or otherwise--has been known to be both potent and lyrical. But the charm of Casocot's writing is his unique foray into the borders of Philippine literature. I won't lie: Philippine fiction tends to gravitate towards Manila-centric stories and that is just one example of how Rosales deviates from the norm. His stories of Dumaguete is wildly imaginative yet also grounded by telling details and nuances that identify him not as a tourist but one who calls it home. There is also the nature of the stories of Heartbreak & Magic for while Casocot has his own writing style, each piece attempts something different and crosses various genres whether it's fantasy, science fiction, or horror.

Heartbreak & Magic isn't by any means a thick collection but this petite publication is easily one of the most important speculative fiction titles of the year. It collects Casocot's speculative fiction stories, including those that have won awards over the years. At eight stories, it seems like slim pickings, but the issue for me is quality, not quantity.

I can't honestly say every story is outstanding. "How Sarah Broke Up With Me," Casocot's foray into flash fiction, was simply ho-hum, while "The Painted Lady," didn't strike me as much as the rest of his stories. But the other six? They are wonderful and exciting and worth rereading (and I have, in fact, reread them for this review).

Take for example "A Strange Map of Time". It's a layered story in the sense that if you read it on the literal level, it's an enjoyable interstitial narrative (which in itself is no mean feat). But to someone who's not versed in Filipino culture and myths, they might miss out on the nuances of local history and folklore. The story admittedly takes a nostalgic and traditional foray into the dilemma (foreigners as the source of evil) but for the most part, it's a well-crafted story that grows with each rereading.


"A Tragedy of Chickens," on the other hand, showcases both Casocot's talent at writing what can be considered as "magic realism" as well as the country's passion for food. Again, it's the details that get to you, and it's amazing how Casocot captures the locality of his setting while crafting characters that are undeniably Filipino. It's funny without being too direct and has a narrative as a sturdy backbone.

And then there's "The Flicker," one of Casocot's few forays into horror, but it's one that surprises and latches on to you.

The beauty of Casocot's fiction is that it has its own unique voice that leaves a distinct, unforgettable impression. The fact that it's all collected in one book, Heartbreak & Magic, is a boon to fans of speculative fiction. The only flaw of this collection is that it lacks a bibliography, and at the end of the day, one must also question the publisher's agenda of having a "Questions for Study" section.

ive been given this book for me to read all the selections from it,and they gave me an independent novel study to answer and review .. and wow! it fantasies me and discover how dumaguete rich the author .. if the highest is 10 then ill rate 8 :) Thank you :)