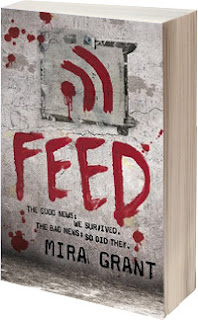 On one hand, you can't take Feed as a vision of the future too seriously. It's not the zombie aspect--that part is convincing and the novel successfully conveys that the author did her homework--but in narrowly focusing on blogging, you have to wonder, how about the rest of social media? What happened to Facebook (or Google Plus), Twitter, or the next thing that pops up? But applying that kind of framework can be faulty. Feed isn't about predicting the future, although Mira Grant does utilize the tools of speculation, but rather how one aspect of today's technology can reshape the way we think and live. And that's really the central conceit, this distilled perspective that's applicable to both blogging and the zombie plague, which goes back to the title and how it can be interpreted in multiple ways.

In terms of concept, what's impressive with Feed is how it's working on at least two levels. Take for example the label of horror. Sure, Feed can be classified as horror, but it's not the zombies that make it terrifying. We can slap on the science fiction label, and Grant writes plausible scenarios for the predicaments her characters find themselves part of, but it's also part of a larger field, whether it's the aforementioned horror, thrillers, or even fantasy (a friend even mistook Feed as a YA book). Each chapter is composed of two parts: a first-person narrative and a blog entry, and while the latter might seem like a redundancy, its inclusion reinforces the central themes.

When it comes to technique, what makes Feed an enjoyable read is Grant's grasp of character, and that's very integral as the story is filtered through the lens of her protagonist. On one hand, Grant's characters are familiar: they have fears, vulnerabilities, and aspirations. On the other hand, and this is evident early on, they're people different from us: they grew with a different kind of culture and social norms. And yet, despite this layer of removal, Feed feels very much like the America of the previous decade and draws upon that specific zeitgeist.

I wouldn't say that Feed is compelling throughout, but Grant provides readers with enough incentive to go along with her for the ride. Her style is upfront and accessible while her settings are detailed enough. Exposition doesn't seem out of place, especially since we are both familiar and strangers to her world, and is actually one of the welcoming aspects for me. Perhaps if there's any criticism I have of the book, and it's not that it's not without its strengths--it's definitely enjoyable and entertaining--it's that it falls short of "greatness"--although it's definitely a memorable one (it'll probably be known as that zombie-blog book). Not that Feed was intending to do so and the book is compelling enough to tempt me into buying the sequel. So, porn for bloggers? Try Feed.
Posted by Charles at 9:23 PM

To be honest, Feed still feels like YA to me, and definitely not because it has youngish characters. The plot development, tone, character's idealism, and even the resolution part of the novel was very reminiscent of YA dystopia. So, even if people say it's not YA, I still think it comes out as fitting for young adults. Then again, nothing wrong with it being YA.

A Question Of ITIL said...