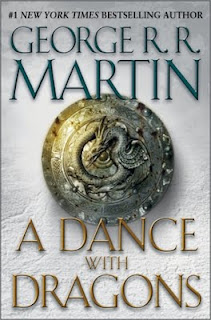 The anticipation for the latest A Song of Ice and Fire novel has been huge. It's been six years since I last read A Feast for Crows and what's significant for me as a reader and a reviewer, aside from the story details that I might have forgotten over the years, is how I'm a different reader today. Terry Goodkind and Robert Jordan's appeal for example has significantly diminished so I was curious how A Dance With Dragons would hold up to my original assessment of the previous books.
Time and experience has actually made me appreciate George R. R. Martin's writing more. The skill in his technique stand out. For example, each chapter typically ends with some sort of cliffhanger, not necessarily in the vein of Adam West-era Batman, but definitely enough to keep you hooked. What's doubly impressive is how the author manages to sustain this for nine hundred pages. Which isn't to say Martin's writing is perfect: there are points where I feel the author was repetitive with character details (which is understandable considering the gap between the novels) and recycling metaphors within the span of a few chapters, but for the most part, Martin's fiction remains interesting and compelling.
There is a set naming convention for each chapter--usually that of the point of view character--and while this can be repetitive, there are parts where Martin starts having fun. The character "Reek" for example goes through various title changes over the course of the novel and this signifies a blatant evolution in the character.
With regards to the book itself, I had no problems diving into the novel cold turkey. Sure, there were parts where I was wondering who certain characters like Reek were but that was eventually resolved (and there's always the mammoth appendix at the end although I never needed to consult it).
While it's previously known that parts of A Dance With Dragons was originally supposed to be included in A Feast for Crows, the novel is probably better for its exclusion as everything thematically fits here, such as the way two prominent protagonists handle the logistics and tribulations of managing a kingdom and an army. Jon and Daenerys attempt to rule as best they can yet they both make painful compromises. In a certain way, Daenery's plight reminds me of America's predicament of occupying Iraq, and while it's tempting to become didactic with the text as Goodkind has done with his own series, Martin here let's it play out, and the reader remains unsure of what the right choice--if any--is.
While there's no shortage of politics and intrigue in the book, a stark contrast (at least if my memory stays true) from the rest of the series is how the fantastical element (downplayed in the first few books) is becoming a key factor in the story. In fact, the prologue itself is undeniably supernatural, and it's an interesting evolution at how events in the series have escalated.
Most satisfying is the fact that A Dance With Dragons remains interesting and unpredictable, although a part of me is also worried whether the series will be finished in the next two books as Martin continues to build, build, build, with the end seeming too far off. Again, I want to stress how thematically concise A Dance With Dragon is, although this also means that not everyone gets the limelight. Some favorite characters only get a chapter or two and their beats depends on how much you remember from the last book.
Posted by Charles at 6:49 PM

The "Song of Ice and Fire" series is a show-stopping six volume call to arms against this nonsense. Readers who come to the novels expecting another eminently predictable generic quest might be lulled to quiescence in the first few innocuous chapters, but will awake - sooner or later - to the unsettling realization that they're playing George R.R. Martin's game now. In A GAME OF THRONES, he systematically slaughters every sacred cow of "heroic fantasy" and, in so doing, injects a vigor and a zest for life and the written word into the genre that hasn't been seen since the beautiful insanity of Tolkien. Heroes die and villains turn out to be not so bad after all.