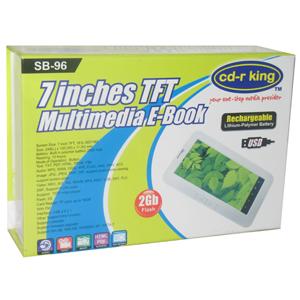 CD-R King debuted its eBook reader (view full specs here) during the second half of last year but it wasn't until this month that they finally restocked on this apparently hot commodity (and released a smaller touch screen variant). Now the problem with CD-R King is that the quality and durability of its products vary: it's been my experience that the company's flash drives are sturdy but I've also heard reports of MP3 players dying within the week it was bought. So I thought a comprehensive review of the SB-96 would prove valuable to book aficionados.

The most lucrative aspect of the device is its price point. At P3990 ($90.00), it's one of the cheaper dedicated eBook readers available. What one doesn't quite grasp is how much lower the cost of the product is. The package not only includes the device and a USB connector but a carrying case and charger as well (oh, and earphones for those planning to play other media on it). With regards to the device itself, its output is a colored LCD screen and the user navigates using buttons. When it comes to storage space, it has 2 GB of memory (more than sufficient if we're just talking about books) but if you need more, you can insert a MicroSD Card to supplement it.

On paper, it looks like a "Kindle-Killer" but in practice, it's hardly that. The first thing that comes to mind is the packaging and interface. The SB-96 comes with a pamphlet manual but aside from listing the specs of the device (some of which are contradictory to what's stated in the box), it doesn't really inform the user on how to use the device. The "real" manual is actually one of the eBooks bundled with it. Then there is the CD installer that is packaged with the SB-96 but it's a placebo. On my Windows 7 computer, it didn't do anything (if you peek at the driver contents, it's actually for the Archos tablet). In fact, my computer wouldn't recognize the device as an external storage device until I configured my settings to Windows auto update* (which is annoying on my end but is apparently the standard operating procedure with most of CD-R King's devices). While the buttons on the device is easy to understand (up/down, right/left, back, menu, home, play, zoom), there are times where it's counterintuitive. For example, you can navigate book pages by either the up/down button or right/left. While there are no problems with the former, it's bizarre to be turning to the next page by pressing the left button. It's all these elements combined that makes the product a less than streamlined experience; I can make do with it but it's not elegantly designed. 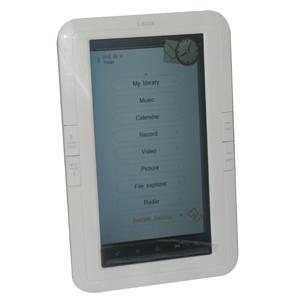 When it comes to usage, I find the LCD screen to be adequate. It's actually brightly lit so I have no problems reading documents on it, at least as far as lighting is concerned. The second factor that needs to be talked about is refresh rates but I can't go into detail without talking about file formats. Under the hood of the SB-96 is a device manufactured in China that's appropriated by CD-R King. It theoretically "supports" ePub, one of the two popular commercial eBook formats in the US/UK, but here's my experience: the 300 kb ePub files I uploaded to the device took too long to load. I was waiting for 5 minutes with nary a sign that it would work, which is strange considering that the 500 MB video file I uploaded was playing in under 30 seconds. The file format that's optimal for this device are txt and PDF files, and how fast it loads depends on the contents of the file: image-intensive PDFs are slow but those that are mostly text are processed quickly. When browsing through pages, there's a small lag (around one second), noticeable but not long enough for it to be inconvenient.

The interesting discussion here is how the SB-96 supports PDF but not ePub. As a reviewer, I get a lot of PDFs so this is one of those devices that's great for me. However, casual readers who actually plan to purchase books from online vendors are out of luck: Mobi and ePub are the two common file formats when we talk about eBooks, and neither is really supported by the device. I'd like to note, however, that txt and PDF are common formats when it comes to non-commercial eBooks, whether it's pirated downloads or fan fiction.

With regards to the reading experience, it's really going to depend on how the book is laid out and your eyesight. A PDF page is usually scaled to fit the entire screen so one sees the entire page immediately. This is great if the text is legibile for you. In my experience, regular text is visible, but anything small like footnotes or copyright text requires you to use the zoom function. Now there are three levels of zooming in (and as a redundancy, changing the "font" which is essentially the same feature). One is the default, which fits the screen. The other two allows you to zoom in closer, and while I have no problems with the zooming in per se, it does take quite some time to load, and worse, even more time to scroll from left to right (or top to buttom). Let's put it this way, I'm fine with the occasional zooming in (such as reading copyright pages) but if the file requires me to use it too often, I'd give up because I'd be spending more time waiting for the device to load than reading. Suffice to say, as long as your PDF is laid out correctly (and most, if not all, of my electronic ARCs are), then it shouldn't really pose a problem.

When it comes to navigation, the SB-96 is unable to use any of the default bookmarks, but you can easily jump to any page, and have access to six bookmarking slots per eBook. If this was an anthology for example, I'd suggest you use your first slot to bookmark the table of contents, and the second one for the page you last left off. It's hardly an automated experience but it's not so bad either.

Ironically enough, while the SB-96 can be problematic as an eBook reader, it's a great media player. I've thrown .flv and .mkv on the device and playback is just fine without any conversion. Videos usually take a few seconds to load but once it works, it's great. The only negative side to watching videos is that there's no way to bookmark where you last left off. It also has a built-in radio and the reception and audio quality was decent.

The SB-96 could also have been a great comic viewer but it honestly handles images sub-optimally. Photos are viewed horizontally instead of vertically so the scale is off; I could view the image but couldn't read the word balloons.

With regards to the MicroSD expansion slot, I tested out a Kingston 8 GB card (manual says maximum it supports is 8 GB while the box says 16 GB) and it worked out fine. What's great about it is that accessing it is nearly instantaneous and there's no noticeable difference between an eBook or video stored in the SB-96's built-in memory vs. that of the memory card.

Another detail worthy to note is that turning on/off the SB-96 takes around 15~20 seconds, so it's usually best to use the device when you know you're going to use it for a long time, as opposed to guerilla reading during your 5-minute break.

Overall, the buyer should be wary of the SB-96. If you're looking to a cheaper equivalent of the Kindle or Nook, this isn't it. Instead, it's an eBook reading device that works under a different ecosystem (txt and PDF files). If you're fine reading PDF and txt files, then the SB-96 should be adequate for your needs with some qualification. As I said before, it also works great as a media player so there's that added bonus too.

*Kaspersky, my anti-virus, also kept detecting a Qvod.ank worm in the device's OS.

Hi, Charles. Great review. This should make it clear to readers here in the RP just what they're getting in this CDR King product. Thanks!

It doesn't. But it won't help you if you could. The images don't rescale well, unless the comic is devoid of word balloons (you can't read the text). I tried.

Thank you for this review. Still skeptical about this though.

hi. got one for christmas. i tried reading a text file but for some reason it only opens upto the third page. should i do something to the reader first?

Hi! Can this read compiled html files? Thanks!

Which would be more preferable then? The 7" ebook or the 5" ebook? Aside from the prices of course, which one is better, in terms of functionality?