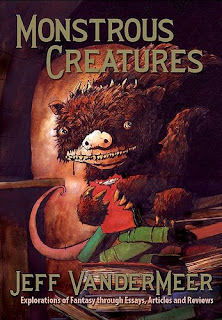 Matthew Cheney, Cheryl Morgan, Abigal Nussbaum, Andrew Wheeler, Paul Witcover. When I think of genre nonfiction that I want to read, whether it's essays or book reviews, these are the names that spring to mind. It's not about eloquence or style but what rises from their writing is critical thought and analysis, as opposed to simply a knee-jerk reaction to the day's latest controversies or book hype. I'd also add Jeff VanderMeer to that list of writers and Monstrous Creatures--aptly titled considering the scope of what VanderMeer has written over the years--compiles some of his best nonfiction.

The subtitle of Monstrous Creatures is "Explorations of Fantasy through Essays, Articles, and Reviews" and it's important that we make a distinction between the four sections of the book. The first and fourth section cover VanderMeer's essays, the former tackling the genre in general while the latter covers his more personal experiences. The second and third sections are similar: they're reviews, introductions, and commentary of other people's works (there are exceptions of course: I would hardly label the article "In Praise of Beer" as either a review or an introduction). But whereas the second section is more in praise of the featured authors or their work, the third has no such imposition as incisive criticism is to be expected. This isn't the first time that I've read such a book and usually, one of the problems as a reader that I run into when it comes to the second and third section is that there's only so much introductions and reviews that one can absorb in one sitting. It makes me question whether there is a more elegant way of presenting the material. Take for example the interviews in the book: there are three and they are inserted at the end of each section. It serves as a good bridge between sections at the same time avoids overwhelming the reader. Unfortunately, considering the volume of reviews in the book, such a dispersion will not work, and there is also the question of categorizing the nonfiction (i.e. when I read the third section, I know they are mostly reviews).

The problem with introductions and reviews isn't that they're not well-written. VanderMeer's criticism of House of Leaves for example is aptly creative for its subject matter, at least one of the ones overtly so. Nor are they ineffective. When VanderMeer talks about Sfar and Trondlheim's Dungeon Series for example, it makes me want to go out, buy their book, and read their work. In a certain way, this is one of the shortcomings of such a collection: the sense of impotence as one reads how great/deficient a piece of text is without being able to interact with the text itself. I mean there's no sadder moment than reading a great introduction to a book and not having the book! In this day of online shopping and megabookstores like Amazon and Barnes & Noble, the problem of acquiring the said books might be less inconvenient, but there's also the point where you break away from Monstrous Creatures to read another author's text to appreciate VanderMeer's writing. Rinse and repeat two dozen times and it can be a humbling--or frustrating--experience, depending on how much you've read of the works VanderMeer references.

To be fair, this isn't a problem endemic to Monstrous Creatures but to collections of reviews and introductions in general. In fact, a good gauge is that the more effective the writing of the said pieces are, the greater the frustration of the reader. If I read a mediocre review of Steve Erickson's Zeroville for example, would I be dying to grab a copy of the book just to confirm my suspicions? When I read the book also plays a significant factor. If these were blog entries that I read once a week, it would not be a challenge. But compiled in a book with the expectation that one reads it one sitting (at least this is the burden of the reviewer who must consume books in a short a time as possible) then the act can feel weary. Of course this reader's methodology also isn't the most optimal. Just as one might want to have breaks when reading a poetry collection, the same advice is applicable here. The fault here is sensory overload on the part of the reader rather than bad writing. Having said that, what I enjoy about VanderMeer's choices is that he writes about books that aren't common. Monstrous Creatures isn't a collection of reviews of the decade's most popular books, but rather books that we probably should be reading.

Whereas I have those reservations when it comes to the second and third sections of the book, I have no such complaints when it comes to VanderMeer's essays. They are, so to speak, material that I could read on and on without having a care for the time. VanderMeer's piece entitled "The Language of Defeat" might have been written as far back as 2008 but it's a subject that seems to haunt the genre reader/writer throughout the years and the article will be just as relevant today as it was yesterday. As a fellow writer myself, "Politics in Fantasy" is a must-read, and while it was published back in 2006, it also has this timeless quality to it as every writer will have their own perspective on whether injecting politics in their fiction is a good or bad thing (or more importantly, how it might be a trick question). What's appealing about VanderMeer's nonfiction is that it's clear that he assumes intelligence on the part of the reader. Take for example his piece "The Romantic Underground" which is written with deadpan humor but astute readers will catch on to the clues such as footnotes like "The author is unable to confirm or deny whether any actual 'RU' research has been done for this essay" or "Except when it's not". One of the more powerful pieces however are in the last section, which is how VanderMeer ties his writing to his personal life. "The Novella: A Personal Exploration" for example not only tackles the merits of the format, but how it affected VanderMeer as a writer. It's both informative as well as shedding light on VanderMeer as a human being.

VanderMeer has contributed a lot to literature--genre or otherwise--and Monstorus Creatures is, if were to be honest, simply scratching the surface. Still, if you're looking for critical reading, or at the very least a roadmap to genre fiction that you might have neglected, you can't go wrong with this book. It's entertaining and intelligent, proving that both qualities can co-exist. My only word of warning is that you might want to go easy on the second and third sections. They are best savored like fine wine rather than a casket consumed all in one gulp.
Posted by Charles at 6:59 AM