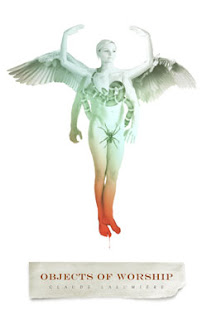 The problem when it comes to praising authors--and I initially heard of Claude Lalumiere from Rick Kleffel's recordings over at The Agony Column--is that when the reader finally encounters their fiction, they don't live up to the hype. Thankfully, that's not the case here as Objects of Worship is a tight, powerful collection and easily elevates Lalumiere as one of my favorite writers even if I had never read anything of his before.

Before I tackle Lalumiere's fiction, there are two things I want to talk about. First is the art of the short story collection. Objects of Worship isn't a thick book but most of the stories stand out (there are two or three stories that are simply competent but they're the exception). What interests me is how the stories are ordered: it's not simply Lalumiere sharing his stories based on their publication date, but a conscious methodology in his chronology. Arguably his best stories are in the beginning of the book, and his comic book-influenced stories are segregated from each other. There is also the tightness of the theme and Objects of Worship feels like an appropriate title as the stories have a religious--sometimes overt, at other times a mere detail--undercurrent. The other point I want to make is how it's too easy to make generalizations about writers, especially if they're not researched comprehensively. If we were to simply read Lalumiere's fiction that was published in Electric Velocipede for example, we might categorize Lalumiere as a writer who writes superhero fiction. Looking at his body of work however, that's not quite true. The author tends to combine conventions to form something entirely different, be they superheroes, myths, or slice-of-life stories. While Lalumiere does write about superheroes, he also writes about other things as well, as evident in the other nine stories in the book.

What makes Lalumiere's writing effective, and why his fusion of typically unrelated tropes effective, is his subtlety. Take for example the opening (and most powerful) story "Objects of Worship". What immediately catches the reader's attention is the presence of gods in everyday life as well as the lesbian relationship between the two main characters. The former element is already a recipe for a successful dystopia but there's another assumption that is never explicitly stated: that the world of "Objects of Worship" has no men. Suddenly, the lesbian relationship of the protagonists isn't a deviance but the norm. This, in turn, leaves much room for interpretation. Could the gods in the narrative be stand-ins for the abusiveness of males? There's a lot to discuss in this short story but that's not the sole reason why it's one of my favorite pieces. Underneath all the conceptual turmoil is the relationship between the characters. Despite the inclusion of the fantastical element, the arguments and inner conflict stem from genuine human drama and Lalumiere writes it with credibility and depth.

Another example is "The Ethical Treatment of Meat" wherein the meat in question is us human beings. Again, it's never explicitly stated that the protagonists are zombies. Instead, Lalumiere writes the narrative in a serious manner so the fact that the gay couple happens to be zombies is incidental and the humor is deadpan. For the most part, the main conflict in the narrative is the relationship between the two main characters but on the other hand, you also cannot deny the cruelty-to-animals parody of the story.

That's not to say each of Lalumiere's story is perfect. I find "A Place Where Nothing Ever Happens" to be problematic when it comes to the supporting female character for example, but it's not surprising considering the inspiration (which the author explains in the afterword). Still, even this "flawed" short story has its merits and again, the lack of didacticism and info dump on Lalumiere's part shows restraint that he manages to utilize as an effective tool.

What impresses me with Lalumiere's fiction is that there's a lot to ponder as most of the stories are layered. They're enjoyable and funny on the literal level but it's also rewarding when you peel its many layers and understand the techniques the author employs. Objects of Worship is easily a must-have collection and my only regret is that it took me this long to finally read Lalumiere.
Posted by Charles at 6:43 AM