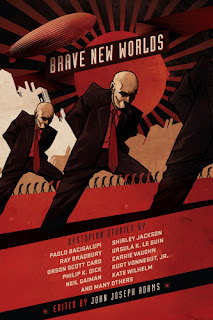 Politics in fiction is a tricky subject and some authors even have the notion that it should be eschewed in their writing. The problem, however, isn't the presence of an agenda (which is inevitable) but rather that it's easy to fall into the trap of being heavy-handed and sounding didactic. A well-written dystopia--and there are a lot of them in Brave New Worlds--embraces the concept of writing for a particular ideology and exagerrates it to one extreme. If you believe that Science Fiction is the literature of ideas, then no sub-genre embodies this more than dystopic fiction. What makes this anthology brilliant is that the theme actually leaves authors with much room for flexibility as it can talk about science or religion or culture (or any combination of those). It's been some time since I last read read an anthology by John Joseph Adams but this is easily my favorite: it's potent, socially relevant, and leaves a strong resonance with the reader. Not that he hasn't attempted such a book in the past, such as with Seeds of Change, but this is a much stronger title, not just in sheer quantity, but with the choices he makes (in both selection and chronology).

I'll be honest: there are a lot of stories in this anthology and not all of them are winners. Some are simply ho-hum while others can be dragging. Having said that, there are a lot of powerful pieces as well, and they're the type of fiction that shines through such an anthology. It's a heavy book with over thirty-three stories and covers a wide variety. It has timeless classics like "The Lottery" by Shirley Jackson and "The Ones Who Walk Away from Omelas" by Ursula K. Le Guin (and Omelas is arguably my favorite dystopia), and even the popular "The Minority Report" by Philip K. Dick. But Adams is thorough and while a collection of classics would have been good enough, what carries the anthology are his selections of (relatively) newly-written dystopias: "Ten With a Flag" by Joseph Paul Haines, "Of a Sweet Slow Dance in the Wake of Temporary Dogs" by Adam-Troy Castro, "Resistance" by Tobias S. Buckell, and "Civilization" by Vylar Kaftan come to mind. There's also everything else in between (there's even a comic, "From Homogenous to Honey" by Neil Gaiman and Bryan Talbot). What's interesting is that while themes like religion and birth control are quite common, each writer approaches those topics from a different angle. The way "O Happy Day!" by Geoff Ryman tackles homosexuality for example is vastly different from "Pervert" by Charles Coleman Finlay for example.

At the end of the book, Ross E. Lockhart has a "For Further Reading" section which is a list of other dystopian books. It's an exhaustive list and there are novels I've never heard of, which is a good thing. My only concern though is that it has this classification of "titles notable for their high literary value" which I find to be a very subjective term and I would have preferred a more neutral term such as "highly recommended". This section also reminds me of the effectiveness of the short story. While it's obviously possible to write a dystopia using novel-length fiction (as evidenced by the list), they can be just as impactful--if not more--in the short story format. That's the appeal of the book: Adams isn't just selling you thirty-three stories, here's selling you thirty-three dystopias or ideas that'll provoke you one way or another.

I couldn't help but think how Brave New Worlds would prove useful in the academe, not just because it features various idea-centric stories that are well executed, but because the various agendas are transparent and gives readers room to discuss the various possibilities and implications. In the introduction, Adams discusses the duality of dystopias, namely utopias, and the book succeeds because I felt that there were some stories in which the alternative doesn't sound so bad, or at the very least makes a compelling argument for living in that kind of society.
Posted by Charles at 7:08 AM