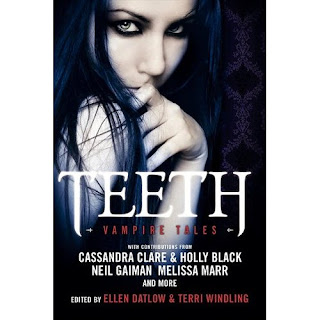 As a matter of transparency, I've been a big fan of Ellen Datlow and Terri Windling's anthologies, whether it's their fairy tale series or mythic series. Having said that, while I do enjoy their books, I'm not necessarily won over by all of their story choices. It might be a significant majority in their favor, but let's be honest: it's seldom that you come across an anthology (original or reprint) where every story and poem is memorable. Surprisingly, Teeth: Vampire Tales is one such anthology, at least as far as personal tastes go. That's not to say they're all "perfect" stories but they all struck a chord and each story had something going for them.

As an aside, when I'm with my writer friends, one of the questions we ask and discuss is what makes a story suitable for teens? It's an apt question because the anthology is published under the HarperTeen imprint and it shows in the writing (whether this is a conscious decision on the part of the authors/editors is a different matter altogether). One of the group's general consensus is tone: you can write any story you want as long as it has the right tone. A lot of the stories here have that sensibility: the narrators or sub-chapters are catchy and playful, and it's obvious that the persona is that of a teen. Not that this is a rule. "Slice of Life" by Lucius Shepard for example is vintage Shepard in the sense that he spares no detail in describing his scenes or his characters, reminiscent of his older work which isn't necessarily targeted at young adults.

Another possible candidate are your characters: your protagonists are teens. While that seems to be the case in this anthology (except for the poems, in which you can't really tell), I don't think that's necessarily a firm requirement. The last factor might be the subject matter: the teen years is when one undergoes a lot of change, a transition period so to speak. While there are certainly stories here that deal with that particular topic, it's not a theme that's universally applicable to all of the them.

Going back to the anthology, let's first discuss the poems. There's only two and they're short but they are great choices as each is distinctively different from the other. "Bloody Sunrise" by Neil Gaiman  would make a great song: it has an effective chorus and its catchiness belies the all-too serious conflict of the persona. "My Generation" by Emma Bull, on the other hand, uses metaphor to great effect as well as other techniques like alliteration to deliver a poem that resonates.

Tackling the fiction part is trickier. In a vampire anthology, one must ask the question: are the vampires benevolent, malevolent, or somewhere in between? Teeth: Vampire Tales manages to cover all three, and more importantly, while some are predictable, others are written in such a way that you don't know where the story is headed.

There are two major trends in the book's selection that I want to talk about. First is how some of the vampires in the book aren't your typical vampires: Chinese vampires, doll-vampires, etc. enrich the mythology without robbing them of their impact or their identity. Another trend is how vampirism itself can be interpreted in many ways, whether on the literal level or as an allegory.

Having said that, it's tough picking favorites in this anthology, mainly because each story is quite potent. "Things To Know About Being Dead" by Genevieve Valentine for example is a great opening piece and sets the expectation and mood for the entire book, whether it's tone, characterization, and impact. Having said that, I think the most powerful piece in Teeth: Vampire Tales is "In the Future When All's Well" by Catherynne M. Valente. It has a lot going for it but the most striking feature is how it could be read as a dystopia with the tone initially disarming the reader but providing a stark contrast in subsequent reads. What's interesting about this piece is that the condition plaguing society in the story doesn't have to vampirism but Valente has fun working with this theme and makes the most out of it with her details. It's also politically charged and could be interpreted as a metaphor for present-day America but whether one takes that into consideration or not doesn't hamper the story the slightest as there'll be other elements to grab your attention.

Another remarkable story goes to "Sit the Dead" by Jeffrey Ford. In a certain way, this is unconventional Ford as the story has this From Dusk Till Dawn vibe to it complete with a showdown action scene. One of the strengths of the story is how Ford usurps the vampire mythos and infuses it with his own elements to the point that even after reading the story, I'm not quite sure whether Ford manufactured his lore or drew influences from some other culture. The layers of horror in the piece is also commendable and is what elevates this from being a formulaic narrative.

There's lots of candidates for my third favorite story: the previously mentioned opening story, "Gap Year" by Christopher Barzak, "Best Friends Forever" by Cecil Castellucci, "Baby" by Kathe Koja, "History" by Ellen Kushner, and even the lengthy "Slice of Life" by Lucius Shepard. In any other anthology, these could easily have been the top stories in those books but here, it seems like a gathering of the best of the best.

What's impressive with Teeth: Vampire Tales is that holistically, it reinvigorates the vampire fiction sub-genre. Neither Bram Stoker nor Stephenie Meyer, the featured fiction encompasses a wide variety of emotion, character, and conflict. There was never a point where I felt "I've read this before" although some were predictable (not that predictability had a negative impact on the reading--a sense of inevitability can be a good thing). It's not just about originality or freshness, but how meaningful and personal the stories got. It's hard to top decades of vampire fiction--especially considering this is probably one of their peak points since Anne Rice--but Datlow and Windling assemble an anthology that breaks out and delves into new, compelling territory, making the most out of the tropes of vampire myth without being beholden to them.
Posted by Charles at 6:45 AM

Hi Charles,
Thank you for the great review.
Two responses to things you brought up:

What defines a young adult story?
The age of the main character is definitely is important. Terri and have been told by our editors at both Viking Firebird and HarperCollins Children that they must be teenage. We had to fight to keep one of the stories in TEETH as is because the protagonist is a college graduate.

And Neil's poem actually is a lyric to a song written by Claudia Gonson of the Magnetic Fields.

Jonathan Strahan just emailed me to inform me about the Gaiman song lyric. Didn't know about it beforehand.