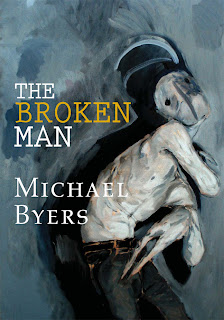 Sometimes, when we read fiction, what we're looking for is something vastly different from what's been done before. Arguably that's the appeal of writers like Kij Johnson or Kelly Link: not only do they use language to great effect but they're also not afraid to experiment. However, we also shouldn't discount fiction that's simply well written, using traditional but effective techniques to convey their story and seduce the reader. The Broken Man by Michael Byers is more of the latter than the former and it's evident from the first few paragraphs. There's nothing jarring or out of place in the narrative. In a certain sense, the writing style is predictable. But it's also compelling and interesting--which is as it should be considering this is a novella so the author has fewer liberties.

The skill of Byers's technique can be pinpointed to two factors. One is his characterization: his protagonist isn't exactly the most likable of characters but readers understand and even sympathize with him. In many ways, he is what the best of us could have been if we were disillusioned. That Byers manages to convey this without being didactic, at least early on, is a point in his favor. The other element is the sense of verisimilitude Byers conjures. There's confidence in the author's writing that makes us believe he knows what he's talking about. Considering The Broken Man takes place during a film shoot, Byers convincingly fabricates a self-contained movie industry within just a few dozen pages. Between the characterization and the telling details, The Broken Man is a short but potent narrative.

That's not to say The Broken Man is entirely formulaic or perfect. As far as the former is concerned, Byers does deviate from expectations and drives the narrative into a different direction later on. The innovation of Byers is the fact that his horror is two-fold: there is an existing internal, psychological horror haunting the characters while the external horror is simply the catalyst for the conflict to emerge. Unfortunately, this innovation is also the author's weakness. The so-called monster in the story, at least as far as description is concerned, isn't terrifying. There are also moments in the story which are supposed to be suspenseful but this reader feels cheated during those moments: there is no seeding of the protagonist retaining or losing his talisman, so the success and failure of the encounter feels like a coin toss.

I wouldn't say The Broken Man's flaws are its weakness per se. This is where Byers attempts something different and while his execution is far from ideal, it nonetheless stands out from the pack. The good more than outweighs the bad and Byers's skill keeps readers glued to the book.
Posted by Charles at 6:39 AM