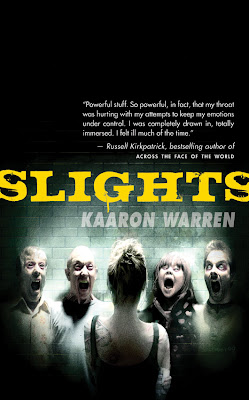 The protagonist of Slights suffers from a particular mania and it's a testament to Kaaron Warren's skill that the reader shares in her voyeurism and curiosity as one can't seem to pry their eyes from the page. This novel has a dark sensibility that's not overt but rather narrated as if it were the most natural thing in the world--and you'd believe it. Combine this with the other character-centric elements Warren includes and I can easily imagine this book nominated for something like The Shirley Jackson Awards in 2010.

Warren is actually faced with an unoriginal challenge: creating character investment for the least sympathetic of characters. But due to her language and technique--most noteworthy is her repeated use of "false futures"--scenes are fresh and keeps the readers on their toes. Another interesting element in the prose is the sense of time that's apt for the horror Warren is attempting to build upon. In many ways, it's anti-horror, because rather than going for one big shocking moment, what's presented is a prolonged darkness that is even more disturbing upon closer inspection.

There's also some mystery elements added in, including a puzzle, but these are, in my opinion, unnecessary. In fact, there's a couple of micro-narratives in the book that add color and detail, but I feel ends up being too long. Still, despite these complaints, Slights is this weird animal (in a good way) that's atmospheric and different from a lot of novels that's out there, and not just due to the subject matter, but because of the author's talent and skill.
Posted by Charles at 5:15 AM