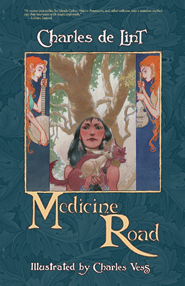 I have this genuine appreciation for Medicine Road because it's the type of book that's just the right length and is compelling enough to tear me away from various distractions. I'm not a fan of de Lint but his prose hooks you immediately, and this is actually a pretty book thanks to the artwork of Charles Vess.

For me, Medicine Road is spectacular because its disparate elements all jive together. The narrative for example is preceded by a poem which conjures the appropriate atmosphere. The first chapter itself captures a certain native American tone and while it's very different from the succeeding chapters, it doesn't feel out of place in the context of the book. And then you have your cast of characters--actually a good number of them but it's to de Lint's credit that he makes each one distinct in so few words. The story works because of this intricate web of relationships, which in turn reinforces one of the themes of the novel. And then there's the art of Vess which is gorgeous, but there's a scene where the timing is perfect as one is treated to a spread at a critical moment. This might be considered a cheap trick by some but it definitely makes an impact. Last is de Lint's language which is simple enough but possesses a certain charm that's apt for this tale.

Reading Medicine Road is experiencing a short novel that's polished and precise. The author has some indulgences--there's a tuckerization that stands out to genre readers--but for the most part it's tight and no longer than necessary. There's not a lot of books that can sustain my interest despite having lots of distractions and this is easily one such book.
Posted by Charles at 6:30 AM