Book/Magazine Review: The Pilo Family Circus by Will Elliott 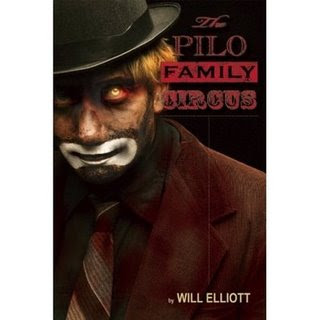 Will Elliott manages to tap into something primal with The Pilo Family Circus. Clowns as a source of darkness and depravity isn't new, but the author wraps a compelling narrative around this premise and the plot actually evolves as we progress through the book. At first glance, I expected the novel to be visceral but it instead hooks you through other means: the distinct characters, the atmosphere, and the intrigues surrounding the circus.

What's peculiar with The Pilo Family Circus is that the first part has a different vibe compared to the rest of the book. At first, it seems the clowns are the main antagonists of the story, and there's a significant lack of action taking place. This is perhaps the weakest part of the book but in a certain ways, it also prepares you for what comes after. The rest more than makes up for the satisfactory opening as every chapter is a fight for one's sanity. Any expectations you had coming into the book is shattered as Elliott delivers something alien and satisfying. Most people might describe the book as horror but for me, part of its charm is the various machinations surrounding the second half of the book. There's a clear build-up, both in the text and in the pacing, which eventually escalates into a fitting nexus of chaos. I wouldn't call the writing tight or perfect--and there are some threads which could have been integrated better--but there's also a freshness and boldness to be found here that's genuinely exciting.

On another level though, one can tackle The Pilo Family Circus as a layered text and there are several dualities and metaphors that can be mined here. Our protagonist Jamie is constantly juxtaposed to his roommates, his alter ego JJ, or simply the rest of the cast of the circus. Nearly everyone has a secret or alter ego, and there's a scene where the true nature of the circus is explained.

Despite a certain disparity in the writing, The Pilo Family Circus is an enjoyable read that delivers something different from the norm.
Posted by Charles at 6:34 AM

I just finished reading it and thought it was brilliant.