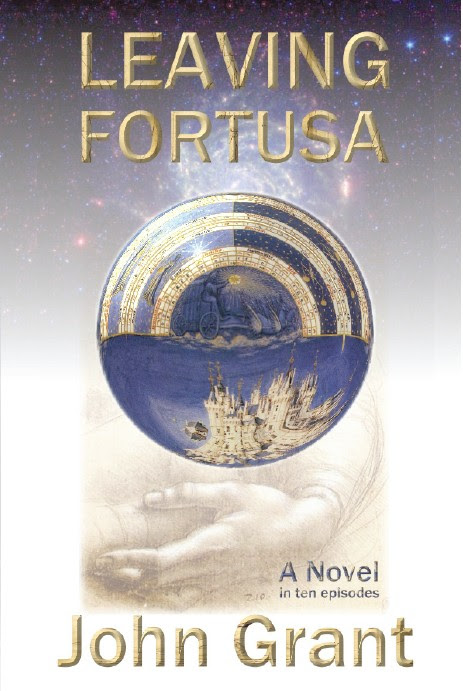 Grant takes a mosaic-novel approach with his latest book, Leaving Fortusa. The connections between each story isn't readily apparent in the beginning but as one progresses through the book, the mystery becomes apparent as certain keywords and themes recur. The sequence of the stories significantly affect one's reading of the book as there is a noticeable shift both in chronology and atmosphere. It's certainly possible to read the stories on their own--and some of them have been published elsewhere--but they take on that extra layer of depth when taking the new paradigm into consideration. For example, the last story, "Whole Wide World", might have be interpreted as a "gimmicky" flash fiction piece elsewhere but serves as a great finisher for the book.

Leaving Fortusa is clearly influenced by modern events and the fiction is politically charged so much so that it's evident where the passion of the author is. Grant has several strong points going for him. The first is that his language is easygoing and casual, making him accessible even as he goes about explaining various sci-fi theories. He also knows when to lighten the mood, sprinkling comedy and satire when necessary. The other strength of Grant is his characterization and Leaving Fortusa is no different from his other short stories or novels. Suffice to say, these stories wouldn't work, especially with their strong pronouncements, if one didn't care for the characters. The book is also characteristic of Grant's typical writing style and many of the stories have long, expository scenes usually explaining an integral concept or conspiracy. The third strength of the book is its flexibility and Grant manages to infuse his stories with elements of fantasy, science fiction, and horror--whichever is appropriate for the story.

Overall, Leaving Fortusa is an ambitious and daring book. The politics can be a hot-spot for some readers but I'd say the book is what it is precisely because of its foray into modern events--which in the end, is part of the human condition. Grant's writing is solid, appropriately funny or horrifying, and has a distinct message to impart.