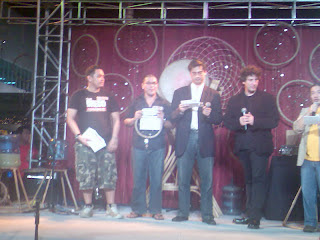 Heubert Khan Michael (the second guy from the left) tied for 3rd place in the comics category during last year's Graphic/Fiction Awards. He released his own comic, "Unstoppable", in last year's Komikon and was recently featured in The Inquirer.

I am a 29-year old Guidance Counselor who loves comic books and superheroes. I am a health buff (I’ve been featured in Men’s Health Philippines twice) and a video game addict, and I hold a Master’s Degree in School Psychology, which I don’t think I’ll need where I’m going. I’ll be working as a full-time comicbook artist soon. =) The calling is much stronger this time that I can’t deny it. I think it’s never too late to become what I could have been. I have my works online and I’d be happy if you check it out: wrathofkhan(dot)deviantart(dot)com.

Back in the early 90’s I have read this comic where the lead character went to the church to confess, only to find out later that there was not a priest listening to him all the while. I thought it was cool, then I thought, “What if SOMEONE actually listened, and what if that someone is God?”. Then I thought of another twist which I incorporated to the “what if” story I thought after reading that old comic, making the story more complex, with a more unrealistically creepy-it-gives-me-the-goosebumps feel. Mr. Gaiman, though, did not feel that way. Made me realize that you can hardly scare the guy who has already thought of all things creepy. ;-)

Trying to impress Neil Gaiman himself is on top of my list in that area. What comes in a close second is trying to best all the wonderful Filipino artists who would be joining. These are the real scare. Wait. There’s an idea. Tell me, if I write about a guy joining the PG/FA and taking the challenge of trying to scare Mr. Gaiman, would that be a horror story, or just a horrible one?

I can not think of anything cooler than Neil Gaiman publicly announcing, live on stage, that my entry was THE BEST DRAWN ENTRY among the lot. Man it gave me an instant shrinkage, and I think I was like 2 inches up from the ground, floating. He again told me that during Post-Ceremonial dinner. =)

Oh, since I’d be joining again? I think this would be more of like a note to self, but hey, I don’t mind sharing it to those who look forward to owning the super-cool dreamcatcher. =) Here goes:
1. Be original. Trust your imagination. =)
2. Give it your all. Win or lose, it’s all worth the effort. ☺ and lastly
3. Have fun while working on your entry!
Posted by Charles at 8:26 AM