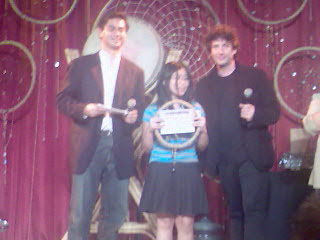 I'm a twenty-something year old Chinese girl who had just recently resigned in pursuit of more emotionally rewarding, though financially deprived pleasures. In other words - a starving artist.

I was riding the MRT during rush hour, right next to an extremely emaciated woman one day; as rude as I'm going to sound, she closely resembled a walking cadaver to me. I wondered then if she'd look any different if she was actually dead. And then I wondered how the people around her would react if she really WAS dead.

Actually finding the time to write the story. Being a full time corporate drone had its disadvantages, especially when your boss thinks he owns your soul. About a few days before the deadline, figured what the hell, called in sick, and speed-wrote the story in under two days.

Nothing beats a kiss from Neil Gaiman. Or the little high you get at being told you've got the potential to be a good writer.

Entertain misgivings. Acknowledge that you might need improvement further down the road. Fuss and worry if your writing's going to be up to par with everyone else's.